Developing Countries and the Future of Small-scale Agriculture 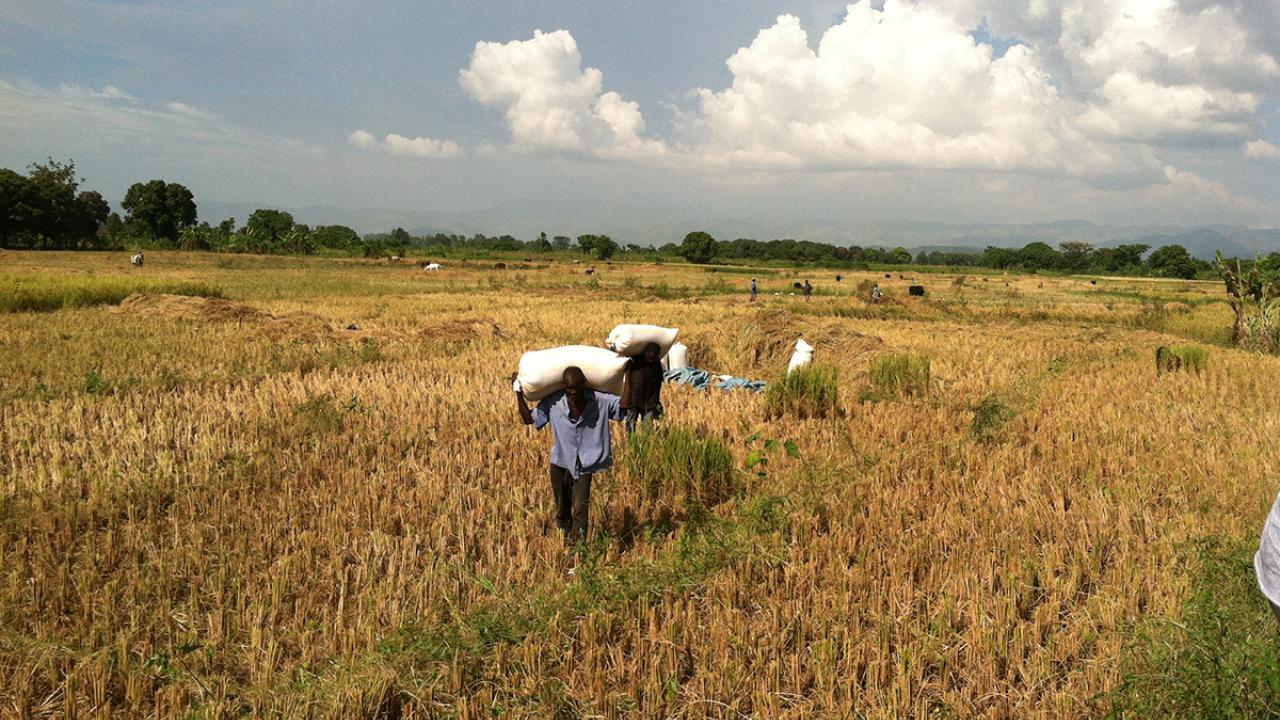 Agriculture has always been at the foundation of people’s livelihoods in developing countries with the potential today to transform lives by raising incomes and reducing hunger and poverty. At the same time, agriculture in developing countries has never been under such threats. These include extreme weather caused by climate change, unexpected shocks like the COVID-19 pandemic and ongoing conflict.

Agriculture in developing countries has always been a challenge for the hundreds of millions of small-scale farmers and pastoralist families who rely on the food they can produce on their own. At the same time, decades of international investments have created new agricultural and financial technologies, which, paired with effective development programs, have created unprecedented opportunities for inclusive agriculture-led growth.

The Feed the Future Innovation Lab for Markets, Risk & Resilience at UC Davis was established in 2019 by USAID to contribute field-tested evidence on programming and technologies that empower rural families in developing countries. Keep reading to learn more about agriculture in developing countries and how our research creates new opportunities to empower rural families worldwide.

There is no single definition for “developing countries.” USAID defines developing countries as countries classified by the World Bank as low or lower middle income, as well as all countries USAID provides assistance. The World Bank classifications are based on per-capita gross national income (GNI). The United Nations list of Least Developed Countries includes low-income countries that have severe structural barriers to sustainable development.

In spite of agriculture’s prevalence, developing countries also have high rates of poverty and malnutrition. Across low income countries in 2019, the prevalence of undernourishment averaged 29%, and poverty rates averaged 44%.

Small-scale farming, also called smallholder farming, supports an estimated 500 million households worldwide. A household may hire help occasionally, but they primarily produce their main source of food on their own. Small-scale farming typically takes place on poor soils and relies on rainfall for water rather than irrigation.

Staple crops, such as maize (corn), wheat and rice, make up the majority of food grown on a small scale in developing countries. Maize is particularly important for millions of people in Africa, South Asia and Latin America. Staple crops have been the subject of constant technological innovation, particularly since the 1960s when new high-yielding varieties launched the Green Revolution.

Pastoralism is also an important form of agriculture in many developing countries. In regions too dry for farming, households keep livestock, such as cows, goats and camels, that feed on grasses and other rangeland vegetation. As many as 500 million people worldwide practice pastoralism.

Risks for Agriculture in Developing Countries

Risks for agriculture in developing countries include production risks like drought and floods that destroy crops in the field and stunt the growth of forage that livestock need to survive. There are also market risks like an uncertainty in prices for agricultural yields.

While agricultural risks of all kinds contribute directly to low productivity and food insecurity for rural families in developing countries, one of the most common risks are weather-related disasters. These disasters, such as flooding in South Asian countries or drought in the Horn of Africa countries, are becoming more frequent and severe due to climate change.

Disasters like flood and drought can quickly drive rural families into dire circumstances. Families typically cope with these circumstances in one of two ways. First, they may cut meals and other forms of consumption such as children’s school fees. Another way families cope is by selling productive assets like farming tools or livestock so they can continue to buy food to eat.

However, the risk of extreme weather in itself can cause hardship. A body of research from the field of development economics shows that people make different decisions depending on their level of risk. For example, farmers may avoid any extra spending on improved seeds or other inputs even if those investments will likely increase yields and profits. The risk of losing everything in a bad year is simply too high.

One of the challenges for agriculture markets in developing countries are the costs to reach small-scale farming and pastoralist communities. Both types of communities tend to be remote from population centers and are widely dispersed across large areas that may not have well-developed infrastructure like paved roads.

MRR Innovation Lab researchers are testing innovations that overcome these kinds of challenges by leveraging technologies like mobile phones and the Internet to connect farmers to markets. In Malawi, a team led from the University of Agriculture and Natural Resources (LUANAR) is testing a virtual marketplace to connect horticultural sellers to buyers. In Nigeria, a team led from the University of Ilorin is testing digital literacy training so farmers can use their mobile phones to access e-commerce to sell their harvest.

Other projects create stronger links between small-scale farmers and broader value chains. In Rwanda, a MRR Innovation Lab team led from UC Santa Cruz is testing the impacts of connecting farmer cooperatives with large-scale maize buyers. In Ghana, a team led from the Institute of Statistical, Social and Economic Research (ISSER) at the University of Ghana is testing a package of training and financing for women shea producers to increase their overall profitability.

Resilience in small-scale agriculture is becoming increasingly critical as climate change drives more frequent and severe weather-related disasters. One definition of resilience is the ability to withstand shocks and stressors without long-term negative consequences. 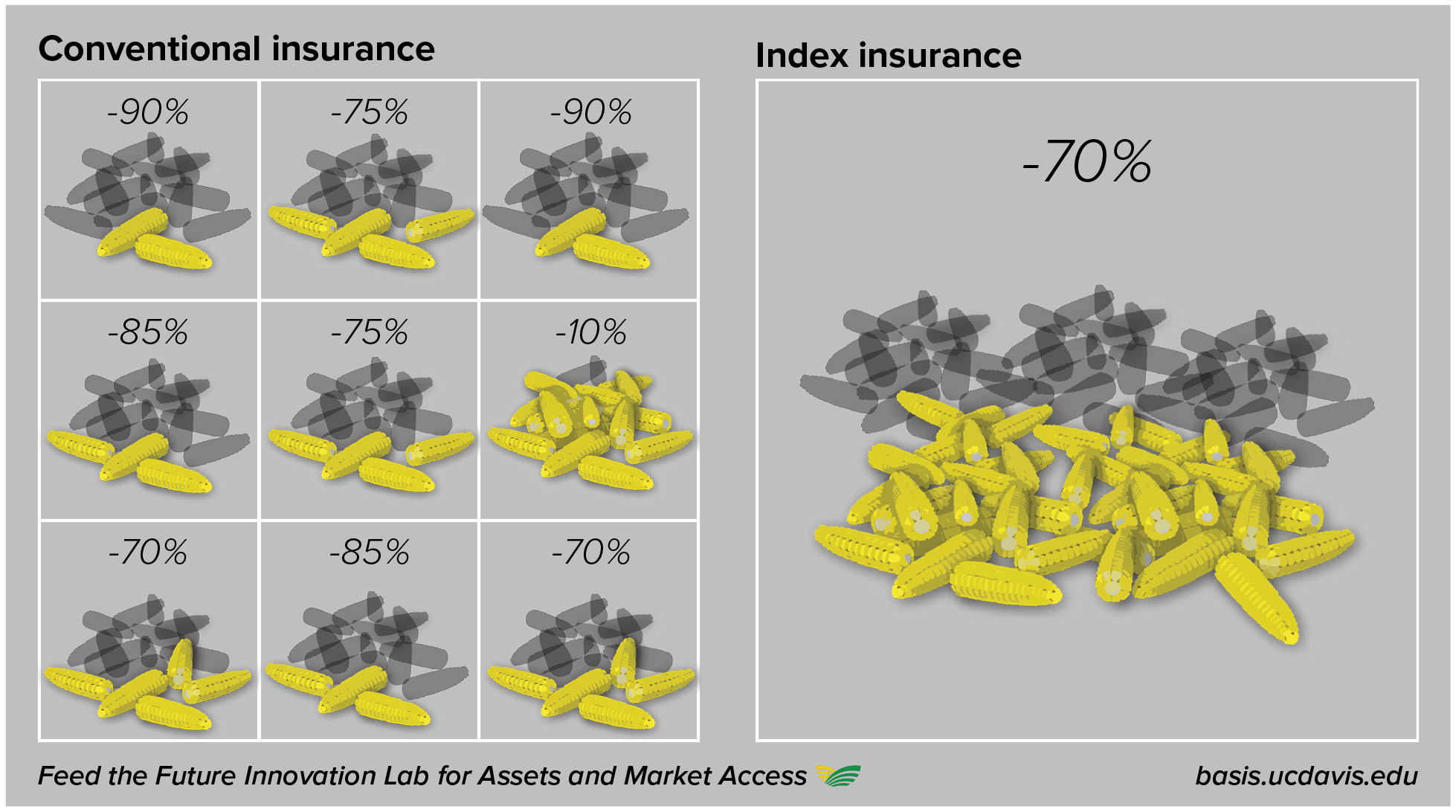 Agricultural index insurance is a tool for risk management that has shown significant promise for promoting sustainable development and resilience. High-quality agricultural index insurance can help small-scale farmers and pastoralists to increase their resilience to weather shocks like drought or flood while encouraging investments in productivity that in good years create a pathway to prosperity. Learn more

Over the past decade, agricultural index insurance has become one of the most proven tools to increase the resilience of rural households in developing countries. Agricultural index insurance bases payouts on an easy-to-measure index of factors, such as rainfall or average yields, that predict individual losses caused by drought or other weather-related disaster. The insurance payments reduce a family’s need to cope in ways that compromise their future.

Development programs on their own may increase resilience to the shocks faced by rural communities in developing countries. An MRR Innovation Lab project led from Cornell University is testing multiple measures of resilience with data from a pilot program for rural women in Bangladesh. A project in Mozambique led from the University of Michigan is testing whether a program for orphans and vulnerable children made communities more resilient to a 2019 cyclone disaster.

MRR Innovation Lab researchers have also tested whether a livelihood-building program in Nepal increased resilience to the impacts of the COVID-19 pandemic. The team found that women who took part in the program before the pandemic were more resilient to financial shocks because they were in a stronger financial position.

Agriculture will continue to be an important way of life for millions of rural families in developing countries even as threats to those livelihoods increase. In 2022, the Famine Early Warning System Network (FEWS NET) warned of emergencies in countries across the Horn of Africa because of unprecedented drought. A United Nations report estimated that the COVID-19 pandemic pushed 120 million people back into extreme poverty.

The MRR Innovation Lab continues to push the frontier of research to meet these and other challenges related to food security in developing countries. The evidence we generate answers some of the most pressing questions for international donor organizations, NGOs, national governments and other stakeholders working on behalf of rural families across the globe.

Sign up for MRR Update for leading field-tested research that strengthens livelihoods and resilience among rural communities in developing countries.