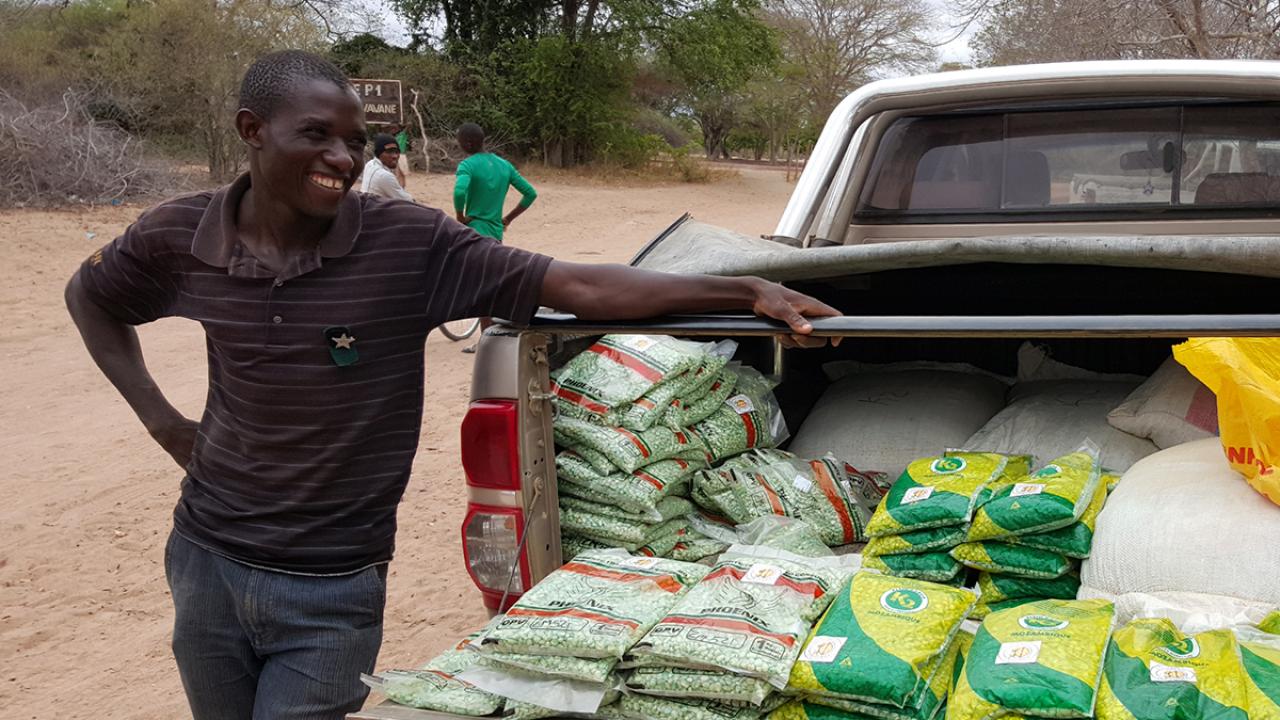 Resilience-building agricultural technologies help rural households in developing countries withstand and recover from climate-related disasters. However, sustaining the adoption of these technologies is a challenge because they do not provide benefits in every year. This MRR Innovation Lab project in Mozambique is testing short-term subsidy and training programs for rural households to learn about stress-tolerant maize bundled with index insurance for a seed-replacement guarantee. The project contributes evidence on how to spark lasting adoption for resilience-building technologies.

Amid the increasing risk of climate-related disasters like drought, a number of new agricultural technologies offer promising ways for small-scale farming families in developing countries to increase their resilience. However, these technologies, in particular stress-tolerant seed varieties and agricultural index insurance, have seen limited adoption among the vulnerable households they can most benefit.

Stress-tolerant seed varieties are most often adopted only with the support of generous subsidies, and are most likely to be dropped if their benefits are not immediate and large. Both technologies individually do have proven benefits, but by design their main benefits only come in the event of moderate or severe losses, which do not happen every year.

From 2015-2018, a research team led from UC Davis designed and tested a bundle of stress-tolerant maize varieties developed by CIMMYT and agricultural index insurance that provided a seed-replacement guarantee. In that study,[1] the stress-tolerant maize proved resilient to moderate mid-season drought. The in-kind seed replacements helped farmers who experienced severe drought to immediately recover and even increase their yields in the following season. In spite of these substantial benefits, the challenge remains of sustaining adoption through seasons when the bundle only adds to the cost of planting.

In recent years, the initial project’s private sector partners in Mozambique have scaled up the bundle in partnership with NCBA CLUSA with support from USAID.[2] The continued scaling of this bundled intervention provides an opportunity to test focused approaches to sparking lasting adoption of these resilience-building technologies and to add evidence of the bundle’s impacts.

This project in Mozambique uses a randomized controlled trial (RCT) to test two approaches to building lasting adoption of drought-tolerant maize seed bundled with index insurance for a seed-replacement guarantee. The two approaches seek to subsidize learning in different ways. The first approach targets learning-by-doing by providing a voucher that reduces the cost to purchase the insured seeds. The second approach targets learning that can take place without direct experimentation through community-based training sessions and experimental games that highlight how the insured seeds reduce overall vulnerability to drought.

The project will involve just over 1,000 farm households from 80 communities in the Manica province in central Mozambique. Each community has access to the insured seeds through the agrodealer network established by NCBA CLUSA, Phoenix Seeds and Hollard Insurance, and will be allocated to one of four groups, each representing a different combination of subsidy approaches.

Learning, and subsequently, sustained adoption, is expected to depend both on the subsidy strategy and on a household’s experience with drought. As such, the study communities are geographically dispersed to maximize variation in the drought conditions experienced across communities within the same treatment group.

The research team will collect data on agricultural decisions and outcomes, as well as on household food security and general economic wellbeing. In order to study the learning process itself and the role of learning in decision-making, surveys will elicit farmers’ expected income from planting the insured drought-tolerant seeds compared to conventional improved varieties under a variety of drought conditions.

Ongoing collaborations in Mozambique between private-sector and NGO partners with support from USAID have already made important strides to make insured drought-tolerant maize available in rural communities. This MRR Innovation Lab project builds on that momentum while providing critical evidence on how to maximize reach and impact. This project supports USAID objectives in Mozambique to reduce rural households’ vulnerability to drought and other shocks while also connecting them to markets.

This project is also measuring how investments in resilience compare against relying entirely on disaster relief to protect the wellbeing of vulnerable, rural communities. In addition to the threat of drought, Mozambique also faces a high risk of devastating cyclones that destroy agricultural productivity. Cyclones in 2019 and 2021 killed hundreds and damaged over 700,000 hectares of cropland.[3] The insured maize in this study may provide an opportunity for farmers who lose their livelihoods in a disaster to replant at no cost with high-quality seeds.