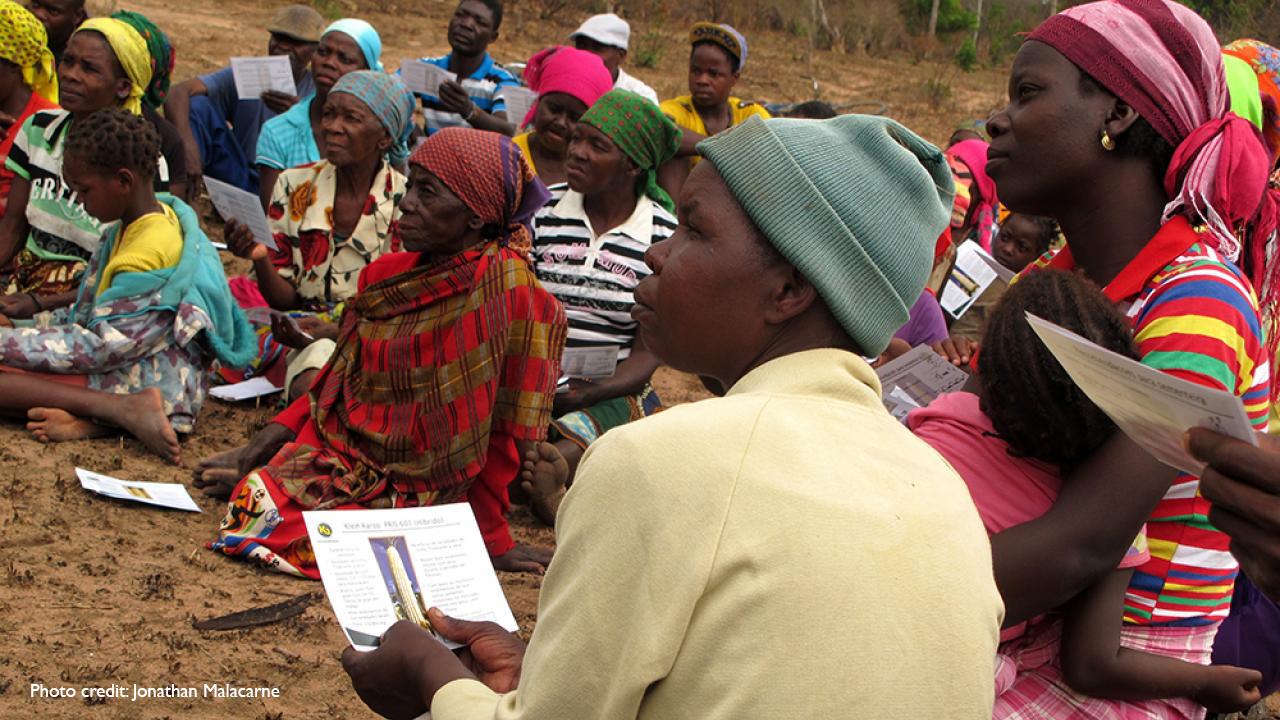 Small-scale farmers have always been slow to try new technologies, even those that promise to improve their economic well-being. This challenge is even greater with resilience-building technologies that reduce overall risk but that may not provide benefits in every year. New research has found that effective experiential learning with interventions structured to minimize the risk of trying these technologies can speed and sustain their adoption, empowering rural families to secure a more resilient future.

In developing counties, climate-related disasters like drought or flood make and keep rural families poor. While the shocks themselves drive families into poverty, the risk of these shocks keeps them poor by limiting their willingness to adopt unfamiliar technologies that promise to transform their food security, income and resilience.

Many resilience-building technologies do not provide benefits in every year. Stress-tolerant seeds have a yield advantage during a moderate drought but may have no advantage in normal years or during severe drought. Index insurance has benefits in a severe drought but in normal years a farmer pays premiums to receive no benefit at all. Economists call this type of technology “stochastic,” meaning that its payoff is uncertain in any given year. What is smart public policy to promote technologies proven to build resilience but that do not provide benefits in every year?

For inputs that increase yields in most years, temporary subsidies create an opportunity for a farmer to experience for herself how profitable they can be. In a recent field study in Mozambique[1] farmers who received a temporary fertilizer subsidy had 66 percent higher maize yields on average for at least two years after the subsidy ended.

The study also documented spillover benefits for farmers who did not receive a subsidy. One year after the subsidy ended, neighbors who did not receive subsidies also had similar yield gains that ultimately accounted for 69 percent of the total benefits of the program. These spillover benefits increased the subsidy program’s benefit-cost ratio from 2.0 to an almost unbelievable 20.5.

In this case, the subsidies created an opportunity for two types of experiential learning: learning from one’s own experience and learning from others through social networks. The temporary subsidy accelerated both types of learning by boosting the early adoption of an input that was profitable even when farmers had to buy it at local market rates.

However, even a familiar technology like chemical fertilizer does not provide benefits every year. In Mozambique, the research team extended the subsidy for an extra year because a severe drought gave farmers no chance to see the benefit of the fertilizer.

For climate-resilient inputs, such as stress-tolerant seeds, the greatest benefit comes during more infrequent circumstances like moderate drought. For these technologies, temporary subsidies and social networks on their own may not be enough.

Two recent large-scale field trials measured adoption rates for two of such technologies. One examined flood-tolerant rice in India,[2] where flooding takes place one out of every five years. The other examined drought-tolerant maize in Mozambique and Tanzania,[3] where mid-season drought happens roughly four out of every ten years.

The same appears to be true with insurance, though experiencing first-hand how insurance works with payouts may not lead to permanent adoption. Index insurance is fundamentally different than an input like chemical fertilizers in that it provides no benefits in most years and is an unfamiliar technology that is much harder to understand.

A new field study in China[4] combined a subsidy with a learning intervention to improve financial literacy. The financial literacy training and the experience of receiving an insurance payout were both necessary to spark permanent insurance take-up. With the training, farmers learned how insurance works. The payouts reinforced that learning with their own experience and seeing neighbors also receive payouts. The subsidy was less important for permanent adoption. In fact, farmers who paid part of the cost of the insurance were more likely to purchase it in the second year. 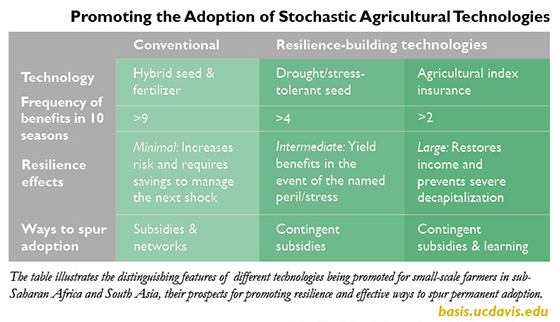 A critical first step to promoting lasting adopting for resilience-building technologies is to build-in ways to maximize farmers’ experience and learning. For productive inputs, farmer field days or other community events can reinforce individual experiential learning with a deeper understanding of how the technology works. Index insurance may require financial literacy or other training that gets reinforced by the experience of receiving a payout for losses.

Temporary “learning” subsidies can play an important role. With the fertilizer subsidy in Mozambique and with index insurance in China, subsidies quickly broadened adoption to maximize the opportunity for experiential learning from others. To achieve lasting adoption, it is critical a farmer has the opportunity to both experience and understand a new technology’s true, lasting benefits.

Jing Cai is an assistant professor of agricultural and resource economics at the University of Maryland.

Michael Carter is director of the Feed the Future Innovation Lab for Markets, Risk & Resilience and a distinguished professor of agricultural and resource economics at UC Davis.

Alain de Janvry is a professor of agricultural and Resource economics at UC Berkeley.

Elisabeth Sadoulet is a professor of agricultural and Resource economics at UC Berkeley.