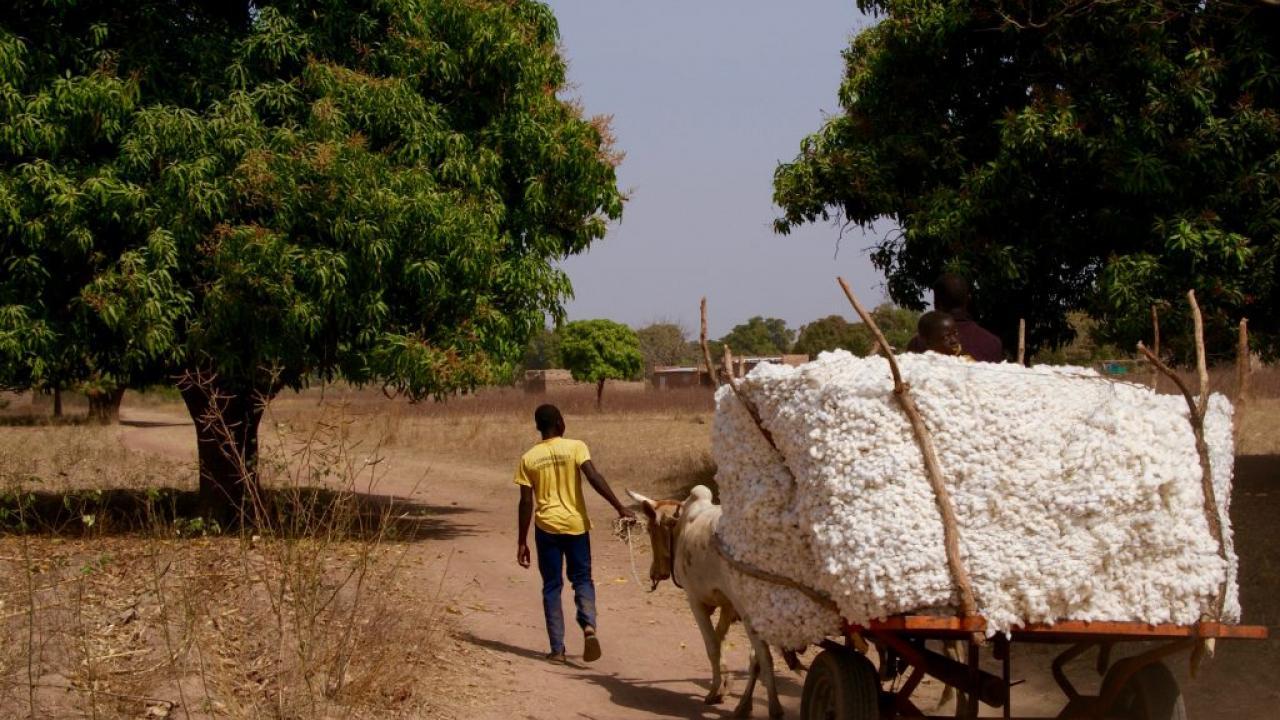 Cotton production in the Sahel region of central Mali is a costly and uncertain operation. Farmers exposed to the extreme weather variations of the semi-arid climate have adapted and developed risk coping mechanisms, including self-insurance strategies and limiting cotton cultivation. Farmers also organize into cooperatives to help informally insure one another, as well as to gain access to loans. If a farmer has a bad year, the others in the cooperative can help by lending money or, if a farmer has an outstanding loan, by helping with payments. 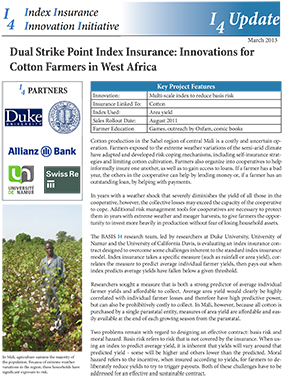 In years with a weather shock that severely diminishes the yield of all those in the cooperative, however, the collective losses may exceed the capacity of the cooperative to cope. Additional risk management tools for cooperatives are necessary to protect them in years with extreme weather and meager harvests, to give farmers the opportunity to invest more heavily in production without fear of losing household assets.

The I4 research team, led by researchers at Duke University, University of Namur and the University of California Davis, is evaluating an index insurance contract designed to overcome some challenges inherent to the standard index insurance model. Index insurance takes a specific measure (such as rainfall or area yield), correlates the measure to predict average individual farmer yields, then pays out when index predicts average yields have fallen below a given threshold.

Researchers sought a measure that is both a strong predictor of average individual farmer yields and affordable to collect. Average area yield would clearly be highly correlated with individual farmer losses and therefore have high predictive power, but can also be prohibitively costly to collect. In Mali, however, because all cotton is purchased by a single parastatal entity, measures of area yield are affordable and easily available at the end of each growing season from the parastatal.

Two problems remain with regard to designing an effective contract: basis risk and moral hazard. Basis risk refers to risk that is not covered by the insurance. When using an index to predict average yield, it is inherent that yields will vary around that predicted yield - some will be higher and others lower than the predicted. Moral hazard refers to the incentive, when insured according to yields, for farmers to deliberately reduce yields to try to trigger payouts. Both of these challenges have to be addressed for an effective and sustainable contract.

In designing the contract, researchers had two primary aims: to improve the accuracy of the contract in predicting losses and triggering payouts appropriately, and to minimize moral hazard. A traditional yield index contract design, using the geographically larger district yields to predict coop (subgroup) losses, might render these two goals contradictory. But the cooperative’s average yield is imperfectly correlated with the district’s average yield. Consequently, two adverse situations may occur:

One way to decrease basis risk in this situation is to reduce the geographical area used to compute the index. If the index were simply based on the coop yield, it would eliminate false positive and false negative. However, this would also increase the scope for moral hazard; coops would be incentivized to deliberately reduce their yield to obtain payments. In contrast, a double-trigger structure provides a solution that both reduces basis risk and remains minimally susceptible to moral hazard problems. A double-trigger contract has two triggers instead of one: the first trigger is the cooperative average yield (for example 750kg/ha) and the second trigger is the district yield (for example 1000 kg/ha). An insurance payout occurs only if both conditions are fulfilled: the coop yield is below the coop strike-point, and the district yield is below the district strike-point. It also reduces the risk of false positives or false negatives.

Progress
The insurance product was first distributed in time for the 2011-2012 cotton harvest by Allianz (reinsured by Swiss Re). The uptake of insurance was encouraging, with 30 percent of cooperatives agreeing to purchase the contract, covering fifty percent of the total area in the pilot zone.

Challenges
Political instability in Mali has made continuation of this project unfeasible. However, the adaptations being made to continue research on this contract design will allow researchers to address challenges of transferability and sustained demand.

Next Steps
Because this research started in Fall 2010, only one round of data could be collected before the March 2012 coup d’état in Mali. Due to the resulting near-collapse of Malian institutions, the project could not continue in Mali as planned. In 2013, the project will begin again in Burkina Faso, in conjunction with SOFITEX and Ecobank, where a similar contract design will be used. This will allow for comparisons of strategies and results. 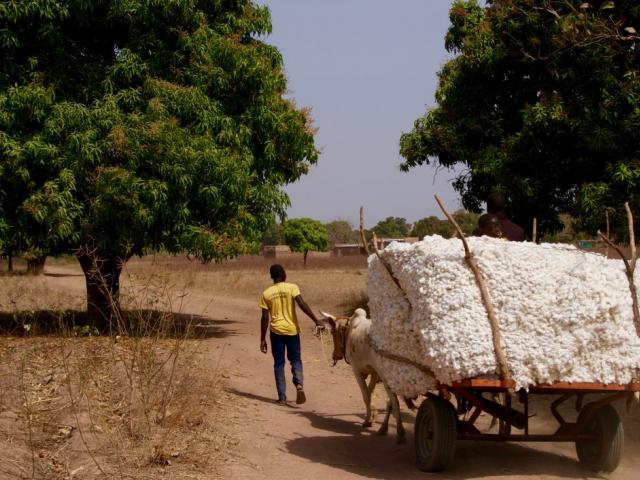