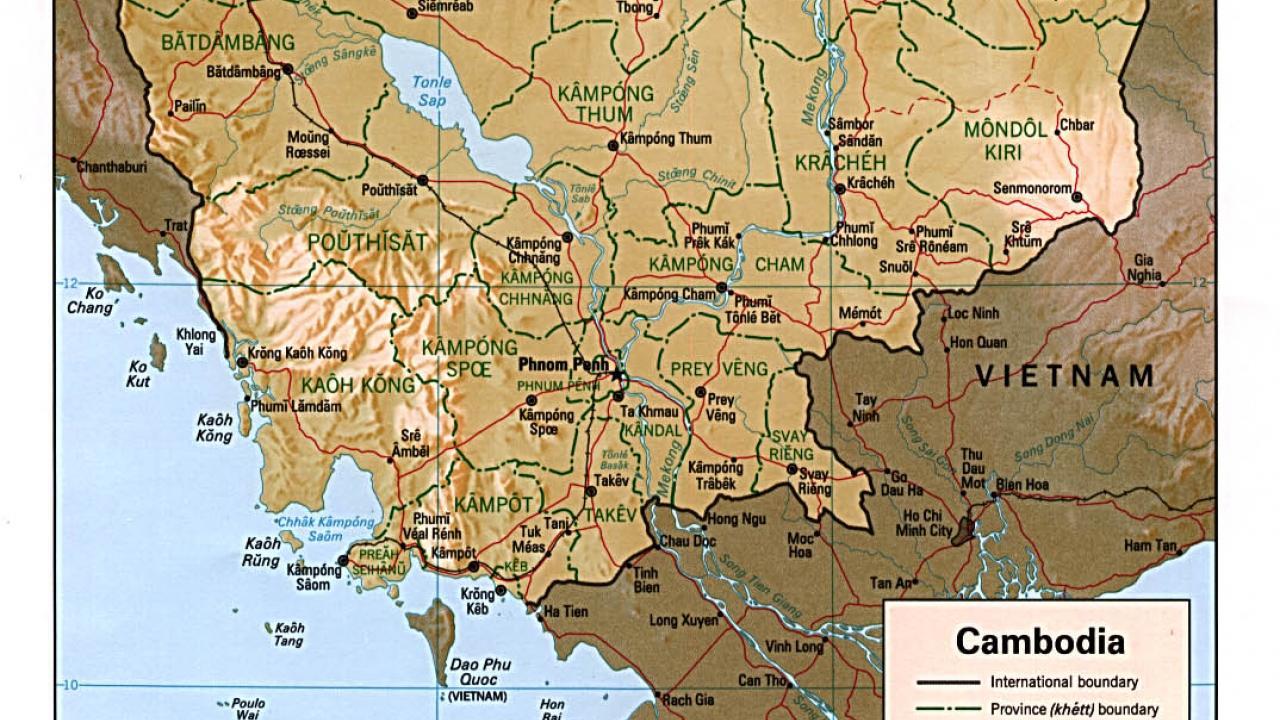 Health Insurance for the Rural Poor

SKY (“Sokapheap Krousat Yeugn,” “Health for Our Families,” in Khmer) is an innovative micro-health insurance program for the rural poor in Cambodia. SKY was created by the Groupe de Recherche et d’Echanges Technologiques (GRET), a French NGO. SKY seeks to improve the health of Cambodians by providing affordable and accessible health insurance and quality care. 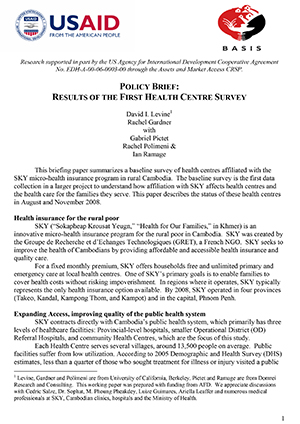 For a fixed monthly premium, SKY offers households free and unlimited primary and emergency care at local health centres. One of SKY’s primary goals is to enable families to cover health costs without risking impoverishment. In regions where it operates, SKY typically represents the only health insurance option available. By 2008, SKY operated in four provinces (Takeo, Kandal, Kampong Thom, and Kampot) and in the capital, Phnom Penh.

Each Health Centre serves several villages, around 13,500 people on average. Public facilities suffer from low utilization. According to 2005 Demographic and Health Survey (DHS) estimates, less than a quarter of those who sought treatment for illness or injury visited a public health facility. Long waiting time, shortage of supplies, and impolite staff were common complaints of the facilities.

One of SKY’s primary goals is to “facilitate and encourage … quality health care, both at primary and secondary levels, to prevent severe health risks.” To further that goal, SKY contracted with the highest quality Health Centres in Cambodia. SKY also makes efforts to improve the quality of health care delivered by these facilities. It hires Member Facilitators (MFs) to collect premiums, monitor facilities, conduct surveys, and manage client complaints. In addition, prepayment of health services provides some funding for the health centres to buy supplies.

In August and November of 2008, Domrei Research & Consulting asked 38 of SKY’s Member Facilitators to each describe the health centre where they work. These 38 Centers serve the areas where SKY initiated operations from December 2007 through December 2008. The survey asks about health center quality, and how the facility has changed since SKY began operations. The survey uses a combination of subjective assessments of facility improvement and a set of checklists on “thank you” payments, operating hours, inventory of drugs and supplies, cleanliness, and equipment.

MF evaluations indicate a number of positive changes regarding staff politeness, waiting time, doctor services, cleanliness, and staff absenteeism. Out of the 38 health centres, the majority reported improvements on all measures (Fig. 1).  Despite the SKY prohibition of thank-you payments at its centres, over half of MFs (58%) reported that clients pay thank-you payments to staff, but only “sometimes” or “rarely.” The phrase “thank you” payment is a direct translation from Khmer to denote the common practice of 3 paying gratuities for services rendered. However, no MF answered that thank you payments are made “often” or “always” (Fig. 2).

In short, member facilitators reported consistent improvement in health centers since SKY arrived. However, MFs may have wanted to portray facility operations in a good light because they work regularly with HC staff and are often friendly with health center staff. In addition, MFs are paid to ensure health centers treat SKY clients well; thus, they may have answered in part to demonstrate that they are doing their jobs well.

Member Facilitators checked the availability of 10 types of drugs and 2 different supplies at the Health Centres. Most, but not all, drugs and supplies were generally in stock. Less than a quarter of the facilities had all 12 items in stock (Fig. 3). One facility in Ang Roka OD shut down for a day and a half during the week of observation because too many drugs were missing for it to operate. Health center receive drugs on a monthly basis. Thus, there is a great variability in the stock of drug depending on when within the month member facilitators checked the stock of drug. Thus, these results should be interpreted with caution.

Malaria medicine (artesunate/ melfloquine) was the most frequently missing medicine (absent at two thirds of health centres). The lack of malaria medicine may be due in part to the fact that malaria is rare in most areas where SKY operates. Nevertheless, infrequent availability is troubling because malaria can be fatal -- especially among those already poorly nourished -- and because people with malaria may seek treatment for malaria from private drug suppliers, where counterfeit malaria drugs are reported to be common.

Centers have most items on the standard equipment list. Electricity supply devices are the next most common missing items (absent in 28% of health centers). Sinks in treatment rooms and running water are also often lacking (in 16% and 21% of centers), items critical for proper hygiene.

MFs looked at five different aspects of health center cleanliness (Fig. 5). Only three health centers were clean and hygienic by all five measures in this survey. Most facilities had at least two reported problems and over a quarter had three or four problems.

The results are significantly limited, because the data describes just thirty-eight health centers at a specific moment based on a single information source. In addition, we have no comparison group so cannot measure if any improvements are related to the presence of SKY. Nevertheless, they show a public health system that appears to be improving, at least based on member facilitator perceptions. Hours of operation are relatively well observed (especially in Ang Roka); most basic drugs are available in most facilities; certain critical hygiene practices (namely proper disposal of used needles and syringes) are well observed; and basic equipment and infrastructure is usually present.

At the same time, quality is inconsistent. Many health centers are open less than official standards require; most facilities are missing at least one drug or supply; and staff in nearly all HCs still lack access to the tools needed to provide sterile care (most fundamentally, soap and water).

This report leads to a tentative understanding of health centers soon after they begin to work with SKY. In future analyses we will try examine whether more families enroll in SKY when they live close to high quality health centers. We will also look at whether the quality of health centers improves as a result of their affiliation with SKY. Most important, we will consider whether there has been an improvement in health care for families who utilize SKY affiliated health centers. 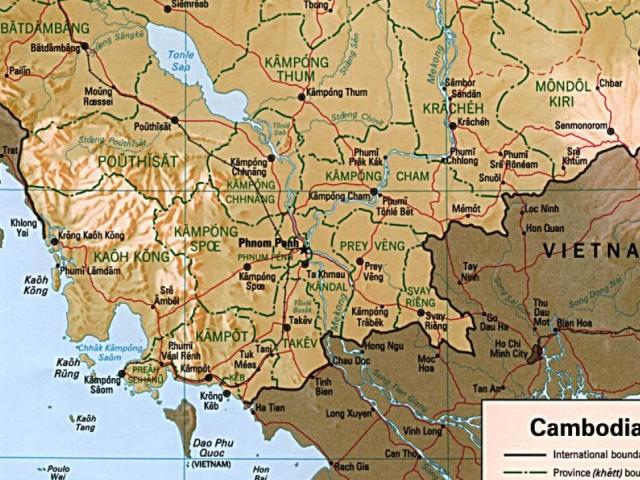