Indonesia is the third largest democracy in the world, the largest economy in Southeast Asia and is home to some of the world’s richest biodiversity. The nation is a rising economic power, vibrant democracy, leader of the Association of Southeast Asian Nations (ASEAN) and Asia-Pacific Economic Cooperation (APEC), and member of the G-20.

However, the country faces environmental and other development challenges. In Indonesia, agriculture accounts for over 41 percent of national employment, and yet the agricultural sector has a growth rate of only one-half that of the national economy. While economic growth has exceeded six percent in recent years, the poor and most vulnerable –nearly half the population – still lives on less than $2 per day. 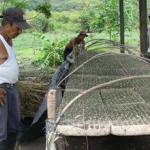 This project will examine the asset-related determinant and the impacts of the participation of small farmers and farmer organizations in modern versus traditional market channels in Indonesia and Nicaragua.
Sign Up for MRR Innovation Lab Updates