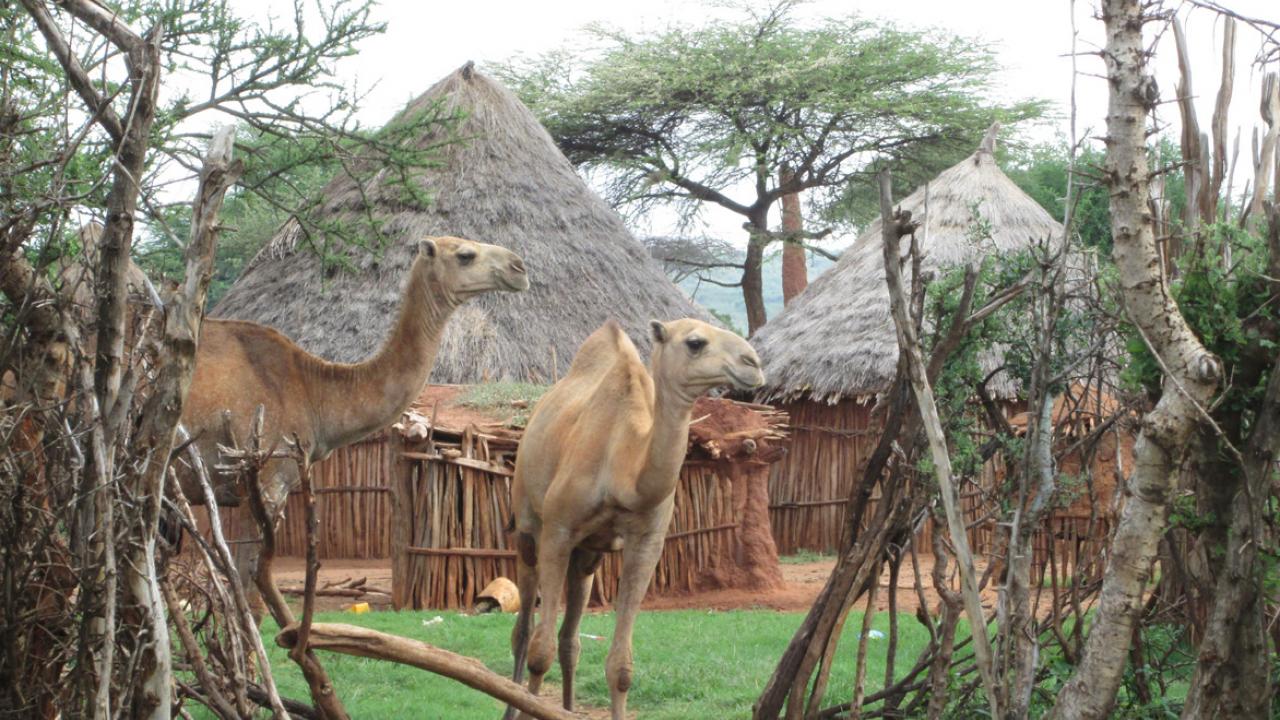 In the developing world, women and their children are often disproportionately negatively affected by household-level shocks, and these effects tend to be more extreme in poorer households. As a result, women are overrepresented among the world’s poor and vulnerable, and therefore serve to benefit disproportionately from improved risk management. 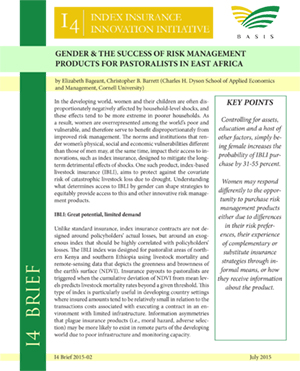 The norms and institutions that render women’s physical, social and economic vulnerabilities different than those of men may, at the same time, impact their access to innovations, such as index insurance, designed to mitigate the longterm detrimental effects of shocks. One such product, index-based livestock insurance (IBLI), aims to protect against the covariate risk of catastrophic livestock loss due to drought. Understanding what determines access to IBLI by gender can shape strategies to equitably provide access to this and other innovative risk management products.

Unlike standard insurance, index insurance contracts are not designed around policyholders’ actual losses, but around an exogenous index that should be highly correlated with policyholders’ losses. The IBLI index was designed for pastoralist areas of northern Kenya and southern Ethiopia using livestock mortality and remote-sensing data that depicts the greenness and brownness of the earth’s surface (NDVI). Insurance payouts to pastoralists are triggered when the cumulative deviation of NDVI from mean levels predicts livestock mortality rates beyond a given threshold.

This type of index is particularly useful in developing country settings where insured amounts tend to be relatively small in relation to the transactions costs associated with executing a contract in an environment with limited infrastructure. Information asymmetries that plague insurance products (i.e., moral hazard, adverse selection) may be more likely to exist in remote parts of the developing world due to poor infrastructure and monitoring capacity.

By circumventing many of the problems that plague non-index insurance products and protecting against covariate shocks, IBLI has potential to profoundly impact the risk management landscape in high-risk, livestock-dependent pastoralist areas. Yet demand has been relatively low. In these areas, men have higher financial literacy, greater control over assets, more education and greater access to information, which suggests that there may be gender differences in access to innovative risk management products including IBLI, and potentially inequitable distribution of product benefits. This research set out to explore whether this hypothesis of gender-differentiated access and uptake was true.

Informal insurance, in the form of social networks based on reciprocity, indigenous lending organizations or similar arrangements designed to mitigate the impact of shocks, may serve as a complement to or a substitute for IBLI, depending on the nature of the shock. The body of research on informal insurance underscores its ubiquity and its partial protection against idiosyncratic shocks. However, informal insurance tends to provide poor coverage for covariate shocks, in pastoralist Ethiopia and elsewhere.

Asset holdings have complex implications for avoiding chronic poverty and, worldwide, women tend to command fewer assets than men. Pastoralist regions in Ethiopia are consistent with this. In this setting, livestock is the primary asset, but intra-household ownership arrangements are complex. In Borana, women hold special rights over animals that are lactating, because milk production and caring for young animals falls squarely in the female domain. Lactating animals generate a large portion of the female income stream, and lactation rates themselves are sensitive to drought. Thus, one might expect women to have greater incentive to insure when there are many lactating animals in the household herd.

At the same time, a woman’s control over lactating animals and associated income might increase her capacity to self-insure and lower her willingness to pay for IBLI, making the direction of the effect ambiguous. Additionally, research demonstrates that female asset ownership can also increase a woman’s intrahousehold bargaining power, or her ability to negotiate her preferred outcome. If a woman’s incentive to insure is positively correlated with the size of her endowment, and that is in turn positively correlated with her bargaining power, there is potential for a positive relationship between female assets and female IBLI purchase.

Finally, consumer understanding of how the productworks is essential to making the decision to purchase, and so the challenges of marketing a sophisticated insurance product to remote communities with high illiteracy and limited prior exposure to formal insurance cannot be understated. Thus, marketing of index-based insurance products necessarily involves an education component.

When information channels are male-dominated and women are difficult to reach, gender sensitivity in marketing and education matters for uptake by women. The successful education of women about IBLI hinges upon specific strategies for accessing women. In Borana, women operate largely in the sphere of the home and therefore one might expect home-centered information channels, like extension workers and local meetings, to have a stronger relationship with IBLI knowledge and uptake by women than channels that share information in towns or via technology.

Does IBLI Demand Vary by Gender?

We use three years of household survey data, IBLI administrative data and qualitative interviews to explore the pathways described above. Table 1 displays differences along key characteristics related to IBLI purchase and highlights that, among purchasers, male and female purchasers have very different characteristics. Despite the many ways that we might expect IBLI demand patterns to differ by gender, we find limited evidence to support the hypothesis of gender-differentiated demand. First, we note that the proportion of female purchasers is roughly comparable to the proportion of female household heads, suggesting that neither women nor men purchase IBLI at a disproportionate rate.

However, it is still possible that the drivers of IBLI purchase are different for men than for women along the dimensions described above. We test this econometrically, and find that risk aversion has an appreciably different effect between men and women, but with some ambiguity. Among women, high risk aversion is associated with a 36 percent increase in IBLI coverage, relative to equally risk averse men, yet moderate risk aversion is associated with a 41 percent decrease in IBLI coverage by women, again as compared to equally risk averse men.

We also find a gender-differentiated response to informal insurance coverage, suggesting that between men and women with equal informal insurance coverage, women are less likely to purchase IBLI. Female assets in the form of lactating animals are associated with a decrease in IBLI demand by women, suggesting that, on the whole, women with lactating animals have a lower incentive to insure. We also saw a modest difference in the effect of home-centered information sources between men and women, with women being slightly more responsive to information received from ILRI survey implementers, NGOs and social contacts.

An additional notable finding is that, controlling for assets, education and a host of other factors, simply being female increases the probability of IBLI purchase by 31- 55 percent. The optimistic explanation is that women’s sensitivity to risk is not fully captured by the risk aversion variable included in the model, leaving women’s perception of IBLI’s risk reduction potential captured in the coefficient on female-headed household. A less optimistic, but perhaps more likely explanation is that, in a context where IBLI sales agents are paid on commission and all sales agents are men, women are more easily pressured to purchase. This relationship is not present when we estimate the effect of gender on the amount of IBLI coverage purchased.

Given women’s multiple vulnerabilities, and those of their dependents, it is essential to consider the effects of any intervention on women as a target population of particular interest. Fancy risk management tools are no exception. In particular, this overview of gender and demand for IBLI suggests that women may respond differently to the opportunity to purchase risk-management products either due to differences in their risk preferences, their experience of complementary or substitute insurance strategies through informal means, or how they receive information about the product.

In particular, qualitative field research suggests that informal insurance access is driven by need, but coverage is driven by adherence to normative behaviors specific to Borana society, especially one’s historic fulfillment of their obligation to help those who aremost in need. As such, it is important to recognize that forces shaping the uptake and ultimate impacts of sophisticated financial products are deeply influenced by difficult-to-measure factors that may vary widely between contexts.

Furthermore, the strong and positive effect of being female, merits a closer look. In particular, follow-on exploration should determine whether the marketing and sales methods and strategies used to encourage IBLI purchase induce a gender effect that inflates IBLI purchase based on social pressure rather than the product’s potential to reduce risk and limit the effects of catastrophic drought. Employing sales strategies that encourage information-based choice to purchase IBLI will contribute to sustainable demand over the long term.

Publication made possible by support in part from the US Agency for International Development Cooperative Agreement No. AEGA-00-08-00008-00 through the Assets and Market Access Collaborative Research Support Program. Funding for this project was provided by the United States Agency for International Development. All views, interpretations, recommendations, and conclusions expressed in this paper are those of the authors and not necessarily those of the supporting or cooperating organizations.