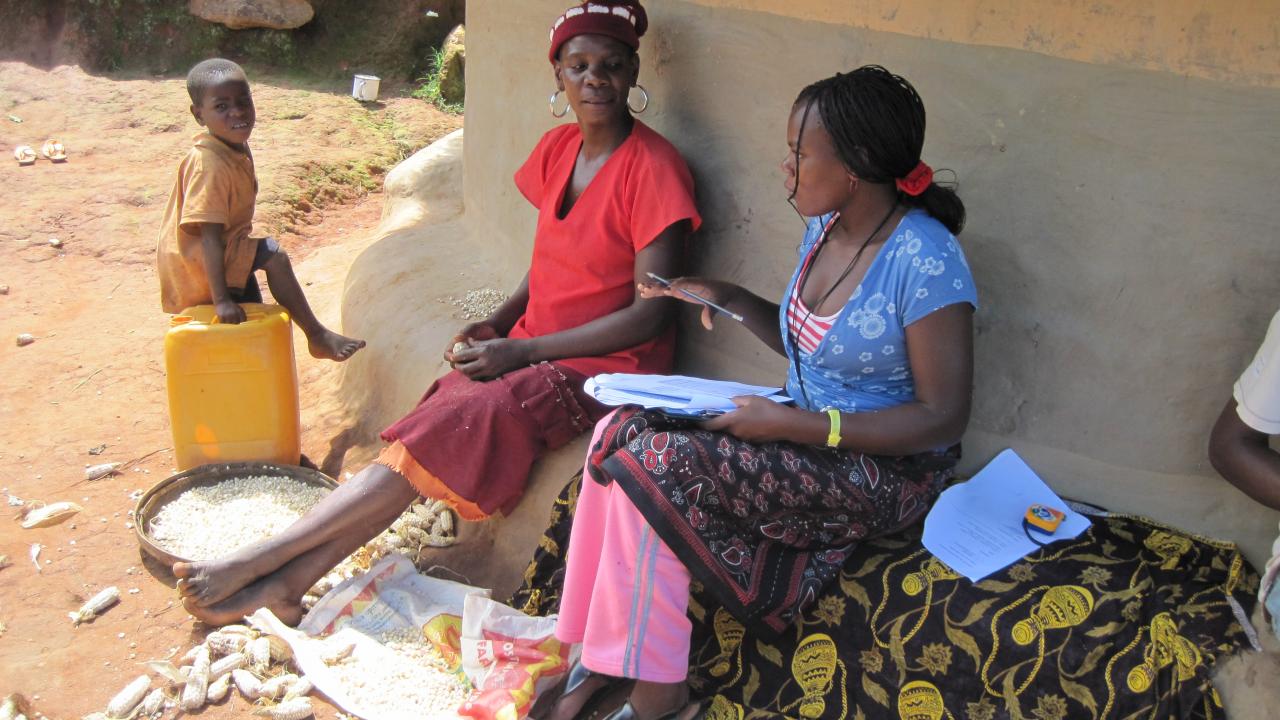 Farmers in sub-Saharan Africa today use approximately 85 percent less fertilizer on their crops compared to farmers in other developing countries, leading to a vast yield gap between what is possible and what farmers are actually harvesting. With climate shocks increasing and entrenched poverty in the region, the persistent failure to adopt fertilizer is a major roadblock standing in the way of farmers trying to increase productivity, secure more sustainable livelihoods, and craft a path out of poverty. 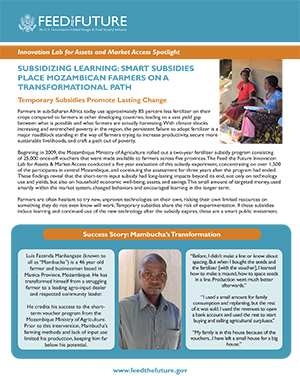 Beginning in 2009, the Mozambique Ministry of Agriculture rolled out a two-year fertilizer subsidy program consisting of 25,000 once-off vouchers that were made available to farmers across five provinces. The Feed the Future Innovation Lab for Assets & Market Access conducted a five year evaluation of this subsidy experiment, concentrating on over 1,500 of the participants in central Mozambique, and continuing the assessment for three years after the program had ended. These findings reveal that the short-term input subsidy had long-lasting impacts beyond its end, not only on technology use and yields, but also on household economic well-being, assets, and savings. This small amount of targeted money, used smartly within the market system, changed behaviors and encouraged learning in the longer term.

Farmers are often hesitant to try new, unproven technologies on their own, risking their own limited resources on something they do not even know will work. Temporary subsidies share the risk of experimentation. If these subsidies induce learning and continued use of the new technology after the subsidy expires, these are a smart public investment.

It is far more challenging to motivate use of an improved technology after a subsidy has ended, when farmers must bear the full costs. Despite this, on average researchers estimate that maize yields were 48 percent higher among those who used the voucher, increasing total maize production by 828 kg when averaged over the two post-voucher years in the study. Not only that, but vouchers caused an increase in the production of other crops than maize in post-voucher years. Treated farmers increased their use of fertilizer on non-maize crops in these latter two post-subsidy years. The overall value of the agricultural production increased by 41 percent for treated farmers.

It seems strange that farmers would continue to use improved inputs, even once the price has effectively gone with the subsidy gone. Before the program, farmers were skeptical about the returns to investments in fertilizer. As farmers experimented with these technologies and learned about their impacts, however, farmers’ expected returns to fertilizer increased 71 percent.

The pattern of these results suggest that the temporary voucher subsidy not only improved maize productivity, but that it also put voucher users on a transformational path, shifting them from near-subsistence farmers to farmers selling more of their outputs on the markets. This finding is especially interesting as one of the main objectives of the subsidy program was the transformation of subsistence farmers into commercial farmers who sell their output in markets.

The power of a good example, or someone spreading the word about the advantages of using new technologies and techniques, is not to be underestimated, researchers found. Many farmers asked to join the voucher program - or wanted to learn more about fertilizer use in general - after they saw how much more their neighbors were growing using improved inputs.

If you have a neighbor, for example, that has received vouchers and started buying and effectively using improved methods and inputs, that’s something that you can observe and learn from. Friends, family, and neighbors see what that farmer is doing, and how it is benefiting him. In this way, researchers observed that neighbors that did not receive the vouchers also learned of the benefits from these improved inputs, and they too changed their farming practices and saw some measure of increased yields.

There is still much to learn about spillover learning through the social networks of voucher winners. Learning how best to harness the power of these learning channels is another promising way to make smart subsidies work even better.

Maximizing the Impacts of Smart Subsidies

This program proved promising as an effective tool for promoting improved input use. The higher yields harvested allowed farmers to build assets, and to maintain higher levels of consumption. Voucher users were able to shift themselves from being near-subsistence farmers to becoming active participants in local agricultural markets.

Even with the voucher, however, uptake was only 50 percent. The main reason many farmers did not use the vouchers was a lack of cash to make the necessary co-payment to purchase the input package. This suggests that a more generous initial subsidy could be even smarter, bringing in more people, and spurring greater learning across a broader range of less well-off farmers, including women. The greater the participation in the program, the greater the socio-economic impacts will be. 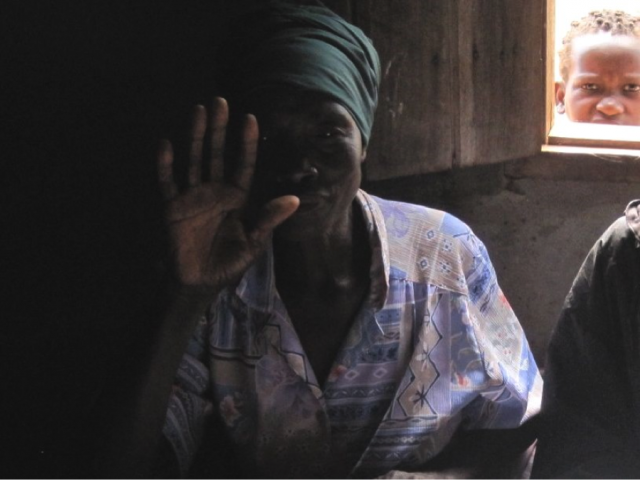