Policy Brief: Who Owns the Land? Perspectives from Uganda 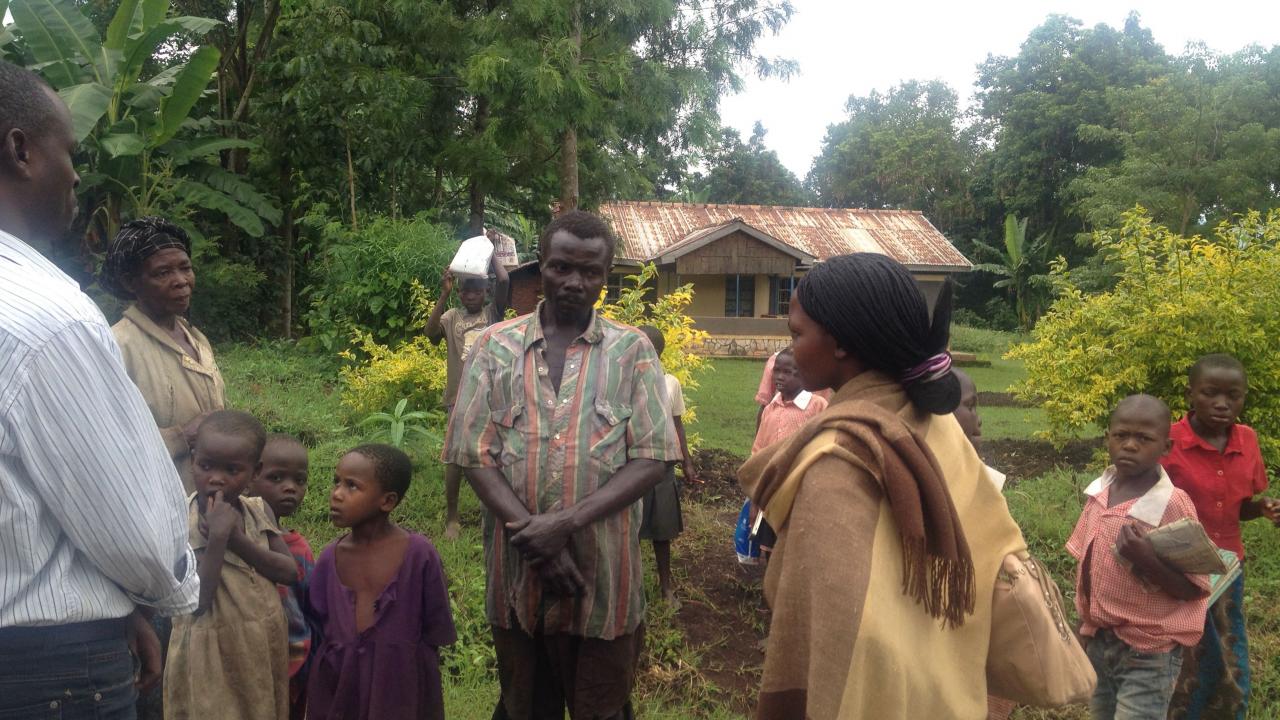 Rapid growth of demand for agricultural land is putting pressure on property rights systems, particularly in Sub-Saharan Africa where customary tenure systems have provided secure land access. Patterns of gradual, endogenous change toward formalization are being challenged by rapid and large-scale demands from outsiders.

The sudden rise in global food prices in 2007-2008 precipitated increased demand for agricultural land from the Gulf countries, China and India, all of which are dependent on food imports. As these countries began seeking to secure their food supplies, European demands for biofuels and speculative demand from other investors also grew, thus increasing pressure on agricultural land in Africa. 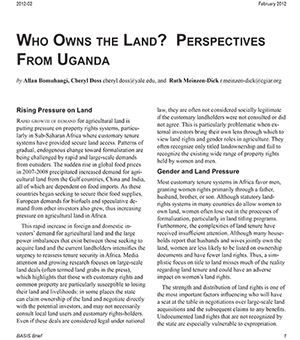 This rapid increase in foreign and domestic investors’ demand for agricultural land and the large power imbalances that exist between those seeking to acquire land and the current landholders intensifies the urgency to reassess tenure security in Africa. Media attention and growing research focuses on large-scale land deals (often termed land grabs in the press), which highlights that those with customary rights and common property are particularly susceptible to losing their land and livelihoods: in some places the state can claim ownership of the land and negotiate directly with the potential investors, and may not necessarily consult local land users and customary rights-holders.

Even if these deals are considered legal under national law, they are often not considered socially legitimate if the customary landholders were not consulted or did not agree. This is particularly problematic when external investors bring their own lens through which to view land rights and gender roles in agriculture. They often recognize only titled landownership and fail to recognize the existing wide range of property rights held by women and men.

Most customary tenure systems in Africa favor men, granting women rights primarily through a father, husband, brother, or son. Although statutory land-rights systems in many countries do allow women to own land, women often lose out in the processes of formalization, particularly in land titling programs. Furthermore, the complexities of land tenure have received insufficient attention. Although many households report that husbands and wives jointly own the land, women are less likely to be listed on ownership documents and have fewer land rights. Thus, a simplistic focus on title to land misses much of the reality regarding land tenure and could have an adverse impact on women’s land rights.

The strength and distribution of land rights is one of the most important factors influencing who will have a seat at the table in negotiations over large-scale land acquisitions and the subsequent claims to any benefits. Undocumented land rights that are not recognized by the state are especially vulnerable to expropriation. But the rapid pace of large-scale land acquisitions outstrips the efforts to register customary land rights, impacting women’s land rights in particular.

This study is part of a larger project on women’s access to land and other assets. Both quantitative and qualitative data were collected in a total of eleven communities in three districts in Uganda. Initially, focus groups and key informant interviews provided information on the assets held by men and women in these communities and the patterns of acquisition and social norms around asset ownership and inheritance. The second phase consisted of a household survey in 2009. A total of 770 individuals in 381 households were interviewed. In each district, four villages were chosen to ensure that the various land tenure systems were represented. Within the villages, households were randomly chosen. Up to three adults in each household were interviewed, including male and female household heads (if both are present) and one or two other adults.

In each household, one member was asked about all household assets including land, dwellings, livestock, agricultural equipment, consumer durables, businesses, and financial assets. Sixty percent of the primary respondents were women. The primary respondent was asked to list all plots of land owned or farmed by anyone in the household, then to identify the owners of each plot. This is the only place in the survey where the term owner was used for land. We then asked numerous questions to identify the various components of ownership.

The primary respondent was asked about plot use and about who makes decisions, including who decides what to grow, what inputs to use, whether to sell the output, and who keeps the revenue from crop sales. A final question asked if an ownership document for the plot existed, and if so, what type of document it was and whose names were on it. In addition, all respondents, were asked about their alienation rights over each plot of land: if they could sell the plot, bequeath it, or rent it out, and if they could do so alone, in consultation with someone else, or with the permission of someone else.

Who Owns the Land?

Figure 1 shows the distribution of plots by type of ownership. The 381 households reported that they owned a total of 505 plots of land. The first column is based on the answer to the question asked of the primary respondent “Who are the owners of this plot?” without defining ‘owners’. In the second column, all plots of land that have any type of ownership document are included. The owners are those whose names are on the documents. Not pictured are the plots for which the ownership document is a registered deed.

The first point to note is the dramatically different picture one gets, depending on whether ownership is defined by local interpretation, documented rights, or legally recognized registered deeds. Only 72 percent of the plots that people reported as “owning” had any form of documentation, including wills, sales invoices, agreements, and unregistered deeds. Only 22 plots (4 percent) had registered deeds, 17 owned by men only, three by women only, and two were jointly owned with someone outside the household.

Given that Ugandan law does not require joint ownership of land between husbands and wives and that customary systems typically provide only men with land, the number of households in which respondents reported that the husband and wife own the land jointly is noteworthy. In fact, 46 percent of females reported that they owned land jointly with their spouse, while 53 percent of the males reported joint ownership. Despite these high reports of joint ownership, it is much less common for the wife’s name to be recorded on any ownership documents. None of the registered deeds were in the name of both husband and wife.

Thus, while there is a common understanding of joint ownership in many cases, there is little documentation to back up the joint ownership, and even fewer registered deeds. Despite the lack of documentation of land rights, the majority of respondents felt reasonably secure in their land rights: 88 percent reported that they expect to have access to the land they are currently using in five years. Moreover, women reported similar levels of security as men.

What, then, does ownership mean? And who should be considered owners? To answer these questions we compare reported ownership with three different definitions based on (1) whether or not there are documents for the land, (2) alienation rights (the right to sell, bequeath, or rent land), and (3) decision making over land use. When respondents have rights over multiple plots of land, we count whether or not they have a particular right on any of their plots. Thus, if a woman owns two plots and says that she has the right to sell one but not the other, we report that she has the right to sell a plot of land.

Overall, the incidence of reported ownership is higher for men than for women. Locally understood ownership is important because we would expect that many of the benefits and behaviors related to ownership are based on this definition. The gender gap is much larger when we consider documented ownership. While 52 percent of men were listed on some kind of ownership document for land, only 18 percent of women were. Only ten of the 770 individuals had their name listed on a registered deed. Of these, four were women and six were men.

Overall, only 4 percent of respondents claimed that they could individually sell any of their plots. A slightly higher proportion reported that they could individually bequeath land, but this is driven primarily by the male respondents in one village. However, the dramatic drop in proportion of respondents between those who report having joint alienation rights and those who report that they alone have alienation rights over the land shows that land rights are not highly individualized, as associated with Western notions of ownership, but rather are socially embedded, with spouses and other family or community members having some decision making rights.

The data presented in this study demonstrate that local understandings of gendered landownership are considerably more complex than externally imposed definitions, especially those based on titles. Both men and women report a relatively high degree of joint ownership of land, even though women’s names are rarely on the official documents and women may lose rights to land if their marriage dissolves. Women do have recognized use and decision-making rights to land; very few men or women report having independent decision-making rights to land. While women are frequently considered to be owners of land in Uganda, they lack the formal ownership that comes with having ownership documents, and they have fewer alienation rights than men.

Whether land rights are robust enough to withstand challenges from outside investors will depend, to a large extent, on what land rights are recognized in the context of large-scale land acquisitions. Depending on how landowners are defined, different groups will be considered stakeholders. Our study demonstrates that the majority of men and women have a stake in the land, but very few have registered deeds and hence are susceptible to being sidelined if those involved in land deals use a narrow definition of legally recognized— rather than socially legitimate—rights.

The dangers of women being marginalized in land deals are particularly acute. Although we found high reported rates of landownership by women, these rates decrease dramatically if only documented land rights are considered. Yet women play a key role in agricultural production and household food security. If the complex forms of local land rights for women and men are not taken into account both the welfare and the social legitimacy of large-scale land deals are likely to be undermined. 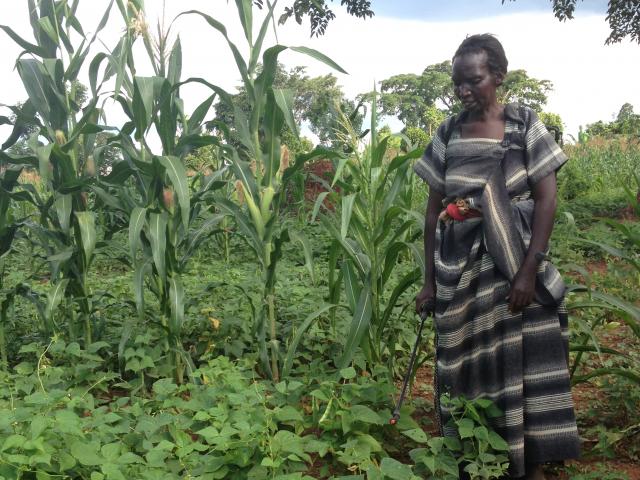 Pathways for Ensuring Access to Assets: Land Tenure Reform and Beyond