Policy Brief: Reducing the Strain of Group Microloans with a Small Collateral Requirement 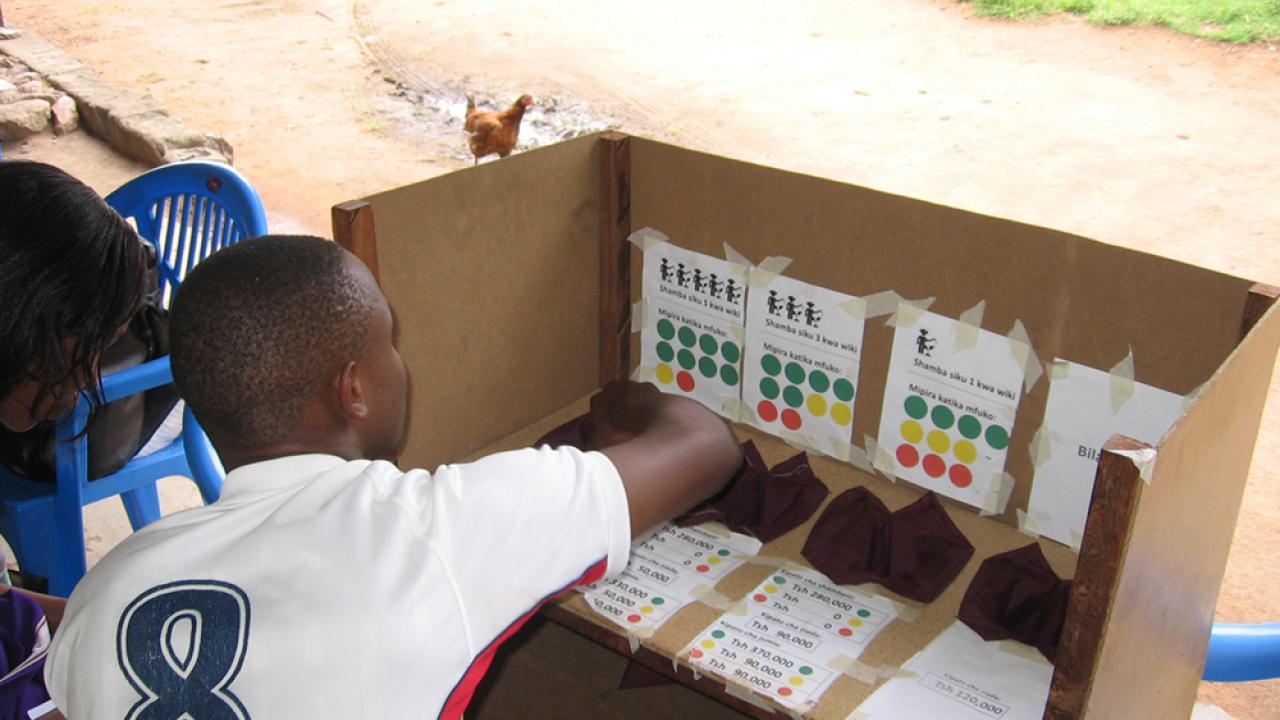 Group lending revolutionized financing for farmers to invest in more profitable crops. However, by shifting the burden of selecting borrowers and collecting debts to members of a group, this model also risks important family and community relationships in the event of defaults. 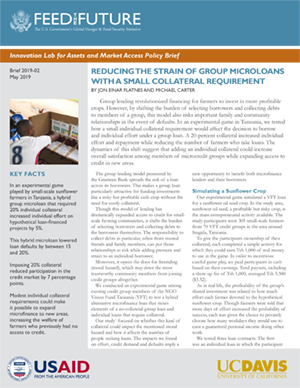 The group lending model pioneered by the Grameen Bank spreads the risk of a loan across its borrowers. This makes a group loan particularly attractive for funding investments like a risky but profitable cash crop without the need for costly collateral.

Though this model of lending has dramatically expanded access to credit for small-scale farming communities, it shifts the burden of selecting borrowers and collecting debts to the borrowers themselves. The responsibility to collect debts in particular, often from trusted friends and family members, can put those relationships at risk while adding pressure and strain to an individual borrower.

Moreover, it opens the door for freeriding (moral hazard), which may deter the most trustworthy community members from joining credit groups altogether. We conducted an experimental game among existing credit group members of the NGO Vision Fund Tanzania (VFT) to test a hybrid alternative microfinance loan that mixes elements of a no-collateral group loan and individual loans that require collateral.

Our study[1] focused on whether this kind of collateral could impact the mentioned moral hazard and how it affects the number of people seeking loans. The impacts we found on effort, credit demand and defaults imply a new opportunity to benefit both microfinance lenders and their borrowers.

Our experimental game simulated a VFT loan for a sunflower oil seed crop. In the study area, sunﬂower oil seed, a profitable but risky crop, is the main entrepreneurial activity available. The study participants were 305 small-scale farmers from 70 VFT credit groups in the area around Singida, Tanzania.

To give the participants ownership of their collateral, each completed a simple activity for which they could earn Tsh 1,000 of real money to use in the game. In order to incentivize careful game play, we paid participants in cash based on their earnings. Total payouts, including a show-up fee of Tsh 1,000, averaged Tsh 5,300 ($3.32).

As in real life, the profitability of the group’s shared investment was related to how much effort each farmer devoted to the hypothetical sunflower crop. Though farmers were told that more days of effort increased the probability of success, each was given the choice to privately choose how many workdays they would use to earn a guaranteed personal income doing other work.

We tested three loan contracts. The first was an individual loan in which the participant simply chose whether or not to borrow and how much effort to devote to sunﬂowers. The second was a standard group loan in which a participant who decided to borrow was paired with two or three other participants, then privately chose their level of effort.

The third contract, a hybrid of individual and joint-liability loans, added individual collateral of 20 percent of her share of the group loan. All three contracts included dynamic incentives, meaning that defaulting borrowers (or groups for the joint liability contracts) were barred from borrowing in future rounds of the game.

Imposing the small individual collateral requirement on its own reduced loan defaults by between 15 and 20 percent. A small part of this increase in repayments results from the fact that the collateral itself offsets some of the losses even if a group completely fails to pay back the loan. However, the majority of the impact was due to the increase in effort. This is one way that a collateral requirement reduces the portfolio at risk in microlending.

Since the 1970s, experimental games like this one in Tanzania have proven a valuable tool for understanding how people make decisions. The body of research they have built provide valuable policy insights, in this case on how adding a small collateral requirement can benefit both microfinance lenders and small-scale farmer groups who use the loans to invest for higher incomes. Our results have several important implications, both for the welfare of small-scale farmers and for microﬁnance lenders.

First, microfinance lenders can introduce small collateral requirements to reduce defaults and expand the reach of their programs. This is particularly true in areas where people can afford a small collateral amount. The prospect of reducing defaults may even make it more feasible for lenders to expand into new areas, thus increasing the welfare of farmers who previously had no access to credit.

In our experiment, we made loan interest rates static, though in the real world higher rates of repayments should have the impact of reducing interest rates. This would be especially true if an influx of lenders in the area increased competition for borrowers. Lower interest rates would increase demand for credit among small-scale farmers and, with a lower cost to loans, further increase their income and welfare.

Our experiment is a first look at how this hybrid microloan would impact lending groups. In practice, this type of loan requires testing in the field. For example, we experimented with collateral at 20 percent, but in a real-world setting we don’t know yet exactly what level of collateral would keep loans within reach while also producing the increase in individual effort. Future testing in the field can help us to fine-tune these features for the best possible hybrid microloan product.

Jon Einar Flatnes is an assistant professor of agricultural, environmental, and development economics at The Ohio State University.

Michael Carter is a professor of agricultural and resource economics at UC Davis and director of the AMA Innovation Lab.