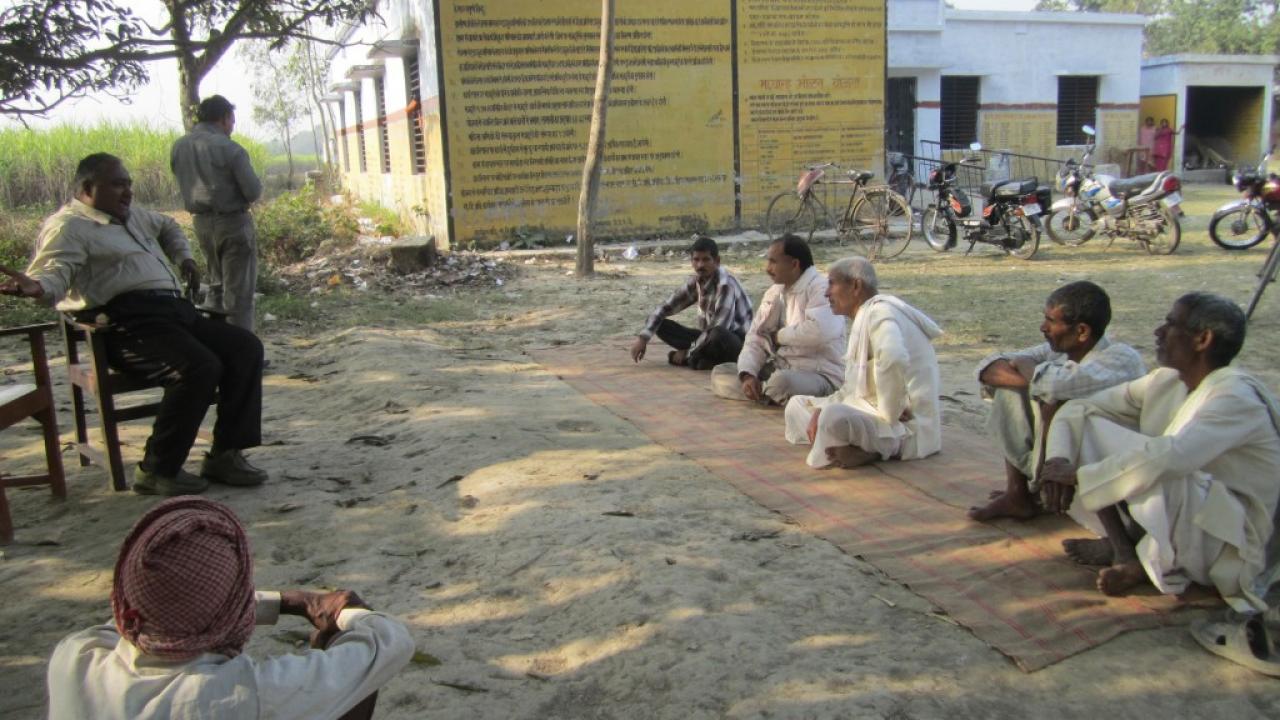 In India, sub-caste or jati based networks commonly share risk to mitigate the adverse effects of unpredictable crop yields. For example, if crop yields are low in one village, a farmer may ask members of his jati who live in a village that was spared the bad weather for financial help. The network provides transfers and loans with the understanding that if the weather conditions reverse they will receive help in return. This system functions as a substitute for formal insurance and acts as the main form of informal insurance prevalent in rural India and in many other agrarian areas throughout the developing world. The existence of this informal system is possibly related to the low penetration of actuarially-fair weather insurance contracts in India, despite strong government support for such markets. 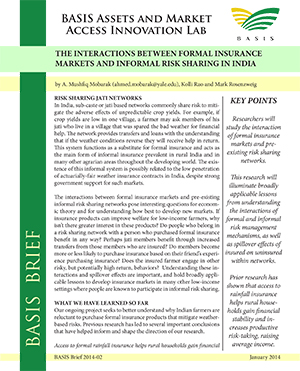 The interactions between formal insurance markets and pre-existing informal risk sharing networks pose interesting questions for economic theory and for understanding how best to develop new markets. If insurance products can improve welfare for low-income farmers, why isn’t there greater interest in these products? Do people who belong in a risk sharing network with a person who purchased formal insurance benefit in any way? Perhaps jati members benefit through increased transfers from those members who are insured? Do members become more or less likely to purchase insurance based on their friend’s experience purchasing insurance? Does the insured farmer engage in other risky, but potentially high return, behaviors? Understanding these interactions and spillover effects are important, and hold broadly applicable lessons to develop insurance markets in many other low-income settings where people are known to participate in informal risk sharing.

What We Have Learned So Far

Our ongoing project seeks to better understand why Indian farmers are reluctant to purchase formal insurance products that mitigate weatherbased risks. Previous research has led to several important conclusions that have helped inform and shape the direction of our research.

To continue our study we will partner with the Agricultural Insurance Company of India (AICI) to market a new insurance product to farmers in Andhra Pradesh, Uttar Pradesh, and Tamil Nadu for whom we have a rich history of their sub-caste’s responsiveness to household and aggregate rainfall shocks. The insurance product will be marketed to both the original set of 5,100 households from our 2010-11 study and to about 2,000 households connected to the original set by their sub-caste identity and village location.

The rainfall insurance policy we will offer is a “Delayed Monsoon Onset” indexbased insurance product, which insures against agricultural losses due to delayed rainfall during the summer monsoon season. AICI will set an expected summer monsoon start date using historic rainfall data. The monsoon onset is defined as a certain level of rainfall accumulation as measured by the block-level Automatic Weather Station (AWS). The onset date is considered delayed if the target amount of rainfall is not reached by one of three pre-selected “trigger” or payout dates. Unit prices for the insurance will vary across ‘blocks’ (small geographic areas) depending on the rainfall risk assessed by AICI.

In the first phase of our study we took precautions to carefully monitor and install additional automatic weather stations. We randomly varied the locations of these new rainfall stations in order to study the importance of basis risk in explaining the low demand for formal insurance. Basis risk is the potential mismatch between the rainfall index-based payouts and the actual losses incurred by the policy holder, which is more likely to occur if the weather station is located far from the policy-holder’s farm.

In Uttar Pradesh, we partnered with National Collateral Management Services Limited to install 19 Automatic Weather Stations (AWS), with 12 of them placed inside 12 randomly chosen villages where insurance policies were being marketed, and 7 placed in the usual central district location, which falls outside any sample village. We informed farmers of the locations of the nearest AWS during our insurance marketing, thereby allowing us to study the effects of perceived basis risk.

Our second round of intervention and data collection in 2013 will be similar to the first round in 2010-2011. Prior to the start of the cropping season we will conduct a marketing visit to all sample households. These visits will be carried out by an experienced team of marketers from the Center for Micro Finance, trained by the local AICI officers. Marketers and a field monitor will visit each household to offer the insurance policy. If the household refuses to make a purchase during the first visit, then the team will return for a second visit a week later. Households will be given between 10 to 20 days to obtain the cash to pay for the insurance, and the marketer will revisit the household after that period to collect the premiums.

In the first round of marketing, we randomly varied the price and marketing pitches.

We varied the price of the insurance contract through on-the-spot lotteries at each household. Households received discounts of either 0, 10, 50, or 75%.

Each household was randomly assigned to receive either a standard insurance marketing script (the “Normal” script) or a script that treated the insurance product as though it was a gamble (the “Gamble” script). Households were then further randomized to receive one or both of the following pieces of information in addition to the marketing script: (i) the historical rainfall distribution data used to compute the insurance premium (“historic” script); (ii) households were told that the insurance product would also be available next year (the “Return” script).

Following the marketing visits, insurance payouts will occur over the four month monsoon period. An advantage of designing a product based on monsoon onset is that payouts can occur earlier in the season when farmers need money more than they do after harvest. We already have demographic data on all households from our baseline survey, information on insurance purchase decisions and payouts and on reciprocity-based financial assistance (net transfers) since January 2011 from our first follow-up survey for all households in our existing sample. After the 2013 monsoon is over, we will conduct a second follow-up survey with all households in the second round sample.

In addition to measures of income, consumption smoothing, investment decisions, risk-taking migration, transfers and loans, the follow-up survey in 2013 will include qualitative data on several topics.

Perceptions of rainfall on plots during the 2011 monsoon season. Farmers may be disgruntled with the insurance policy and discouraged from purchasing it again if the rainfall at their plots deviates significantly from measures at the weather stations (i.e., basis risk exists). We have previously demonstrated that basis risk is an important impediment to the take-up of formal insurance, and using perception-based measures will allow us to re-visit this question.

Transfers, informal loans and gift exchanges made in the last year to and from friends/relatives belonging to same/different jati and living in the same/different village. This data will allow us to examine how the benefits of insurance, either from payouts or through an increase in the average incomes of insurance purchasers, are shared within and across villages and sub-caste networks and how they affect welfare.

Our first round results have already shown that farmers switch to riskier, higher-yielding crops from droughtresistant crops after the formal insurance product is offered to them, indicating that index-based insurance may be a cost-effective and viable policy response to address this major constraint to growth, even in the presence of well-developed pre-existing informal risk-sharing networks. The further analysis we intend to conduct with second round data will allow us to track how formal insurance in turn affects the informal relationships, and will generate evidence on demand at the group level, thereby allowing us to understand the spillover effects of index insurance on non-insured jati members. Specifically we will be able to answer questions about the following five areas which will help greatly to inform agricultural insurance policy in India.

How does variation in experience with insurance products affect the demand for insurance and investment behavior in a subsequent year? In our first round, treatment households were offered insurance, and a subset chose to purchase. We know their purchase decisions, and whether a payout occurred or not. The second round of marketing will allow us to study how direct experience with an insurance product influences the decision to purchase insurance in subsequent years, and whether this has any impact on longer-run investment choices. Any study of insurance demand must take into account how the history of payouts affects demand.

Does an insurance purchase have spillover effects on members of the same jati who do not have insurance? If, among members of the same jati, some people receive insurance payouts, the benefits may spill over to uninsured members through in-kind or monetary transfers. Thus, we will collect data on gifts and loans to monitor spillovers. The finding of spillovers is important because it suggests not only that insurance take-up is a group decision, with implications for marketing, but also that there may be lower than optimal take-up because of free-riding. That in turn may create an efficiency-based motivation for subsidizing insurance.

How does knowing someone with insurance affect one’s likelihood of purchasing insurance? Our first round of marketing has created random variation in exposure to insurance among all villagers, including those who were not offered the product in the first round. We know the jati identity, and can therefore track the depth of exposure. We can also combine this with data on whether first round households received a payout from the insurance product, and whether this positive income shock has an additional effect on uptake rates among risk-sharing network members in the second round. These learning spillovers also have important implications for optimally providing insurance.

What is the effect of announcing that the insurance product will be offered again? In our prior round of experiments, we announced to a random subset of households that we would return to sell insurance again. In theory, households expecting to have access to insurance over multiple periods should be more willing to undertake risky investments that involve longer-run changes in production technology. By making a repeat insurance offer to the same household, and by collecting an additional round of data, we can document whether such long-run behavioral changes occur. One major deficiency of prior insurance RCT’s is that they do not correspond to any real-world insurance program, which lasts more than one period. Such studies may severely underestimate the impact of insurance provision on profitability.

Effects on Other Behavior

Does having access to agricultural insurance encourage people to engage in other risky but potentially profitable experiments, such as migrating in search of employment? In theory, eliminating the risk of a negative shock due to crop failures could free up household assets (which would otherwise be saved to smooth consumption in the case of a shock) to invest in other risky but potentially profitable activities. A second round of data collection will allow us to see if, in the longer term, households do in fact shift their investments in this way. 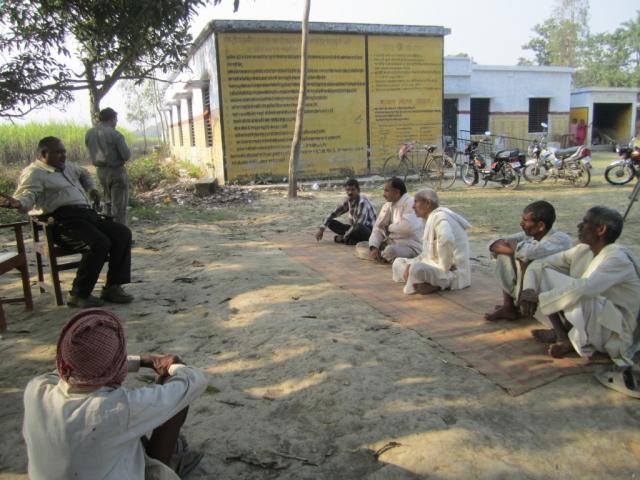 Selling Formal Insurance to the Informally Insured in India