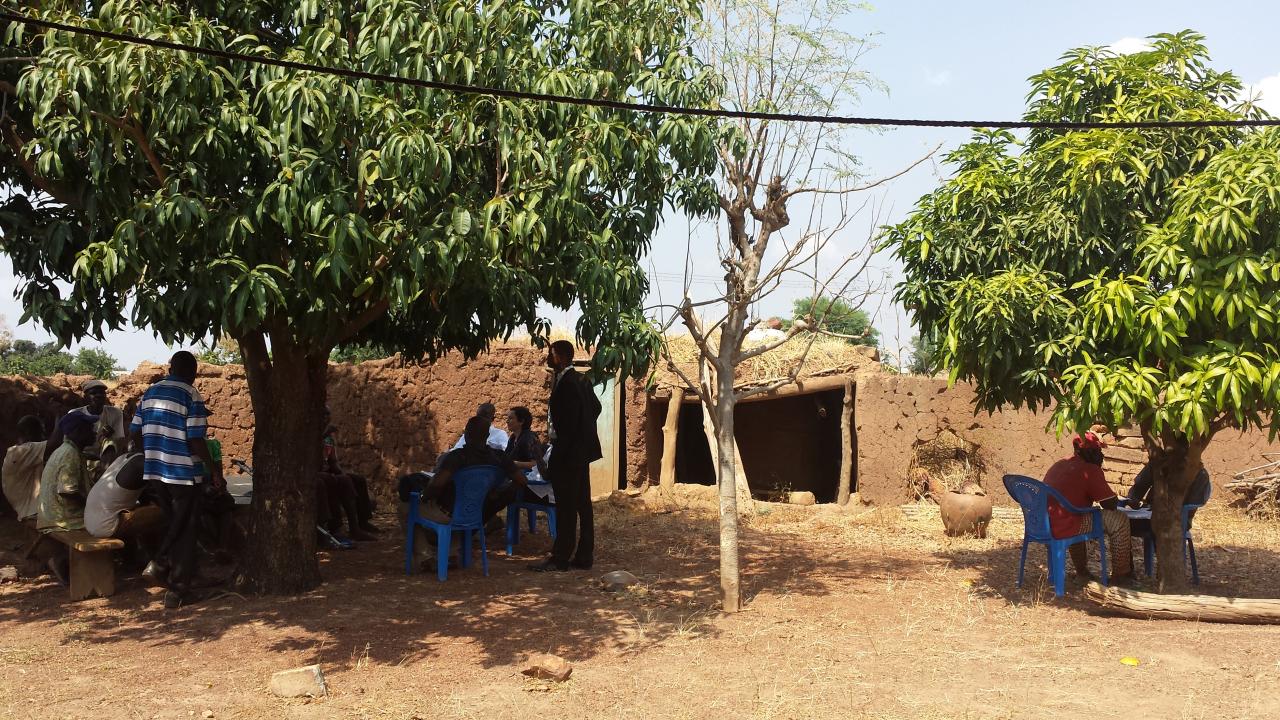 Increasing smallholder farmers’ productivity through technology adoption is key to reducing poverty and increasing food security in the developing agrarian economies of Sub-Saharan Africa. Increasing access to credit can spur the adoption of more productive technologies, but may require reducing risk for both smallholder farmer and lender.

In a randomized controlled trial (RCT), we investigated how drought index insurance coupled with agricultural loans impacts the agricultural credit system and technology adoption among smallholder farmers in Ghana. Our results suggest that insuring agricultural loans significantly increases access to credit for these farmers. 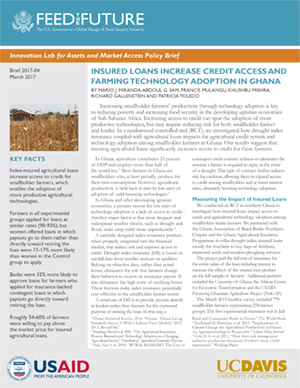 In Ghana, agriculture contributes 23 percent of GDP and employs more than half of the workforce.[1] Most farmers in Ghana are smallholders who, at least partially, produce for their own consumption. However, agricultural productivity is held back in part by low rates of adoption of yield-boosting technologies.[2]

In Ghana and other developing agrarian economies, a primary reason for low rates of technology adoption is a lack of access to credit.[3] Another major factor is that more frequent and widespread weather shocks, such as drought and flood, make crop yields more unpredictable.[4]

A carefully designed index-insurance product, when properly integrated into the financial market, may reduce risk and improve access to credit. Drought index insurance (DII) is based on rainfall data from weather stations or satellites. Relying on objective data, rather than actual losses, eliminates the risk that farmers change their behavior to recieve an insurance payout. It also eliminates the high costs of verifying losses. These features make index insurance potentially cost-effective in the smallholder farmer sector.

A novel use of DII is to provide payouts directly to lenders rather than farmers for the expressed purpose of retiring the loan. In this way, a contingent credit contract reduces or eliminates the amount a farmer is required to repay in the event of a drought. This type of contract further reduces risk for creditors, allowing them to expand access to credit among smallholders and at lower interest rates, ultimately boosting technology adoption.

Measuring the Impact of Insured Loans

We conducted an RCT in northern Ghana to investigate how insured loans impact access to credit and agricultural technology adoption among smallholder maize farmers. We partnered with the Ghana Association of Rural Banks-Northern Chapter and the Ghana Agricultural Insurance Programme to offer drought index-insured loans mostly for vouchers to buy bags of fertilizer, improved seeds and modern ploughing services.

The project paid the full cost of insurance for the entire value of the loan including interest to measure the effects of the insured loan product on the full sample of farmers.[5] Additional partners included the University of Ghana, the African Center for Economic Transformation and the USAID Financing Ghanaian Agriculture Project (FinGAP).

We conducted a difference-in-differences analysis to identify whether insured loans increase credit access. This method and the randomization of farmers into the three groups allowed us to isolate the estimated impact for each treatment from unrelated influences on credit access.

Farmers in all three groups applied for agricultural credit at similar rates (90-93%), suggesting the treatments had a minimal average impact on farmers’ demand for agricultural loans. However, we found that women in the Microinsured group were between 15 and 17 percent more likely than women in the Control group to apply for loans.

This higher approval rate could mean that banks perceive a lower risk when payouts go directly to repaying the loan. We detected this increase for both men and women, though the likelihood of approval was 36 percent for men and 30 percent women.

In addition to the RCT, we used a contingent valuation approach to estimate farmers’ willingness-to-pay for agricultural loans insured with drought index insurance. We included the willingness-to-pay questions in the baseline and midline surveys. This farmer-reported valuation lets us estimate hypothetical differences in demand for insured loans depending on whether payouts go to farmers or lenders.

Across both insured groups, financial inclusion and education were both associated with higher demand for insured loans. Higher risk aversion among farmers decreased demand for these loans. Prior experience with insured loans showed no impact on willingness-to-pay for either group.

Barriers to technology adoption, such as limited access to credit and environmental risk, must be overcome to meet growing demand for food across developing agrarian economies. Our analysis suggests that index-insured agricultural loans increase credit access, which enables smallholder farmers to adopt more productive technologies.

Several challenges remain. First, basis risk remains a barrier to demand for index-insured loans, as payouts may not cover actual losses. Second, although contingent credit loans most effectively increased credit supply, this loan had the lowest demand in our willingness-to-pay survey. While 73 percent of our sample borrowed in 2014, only 54 percent reported willingness to pay market value for insured loans. This leaves a dilemma: do banks make insurance mandatory or do they offer a choice of insured or uninsured loans?

By making insurance mandatory, banks more effectively protect their portfolios but reduce the number of borrowers. By giving the choice to farmers, those with lower wealth, lower education and higher risk aversion would more likely choose an uninsured loan and thus would be more likely to default on the loan in the case of a drought.

Mario J. Miranda is a professor of agricultural, environmental and development economics at The Ohio State University.

Francis Mulangu is an economist at the Millennium Challenge Corporation.

Patricia Toledo is an assistant professor of economics at Ohio University. 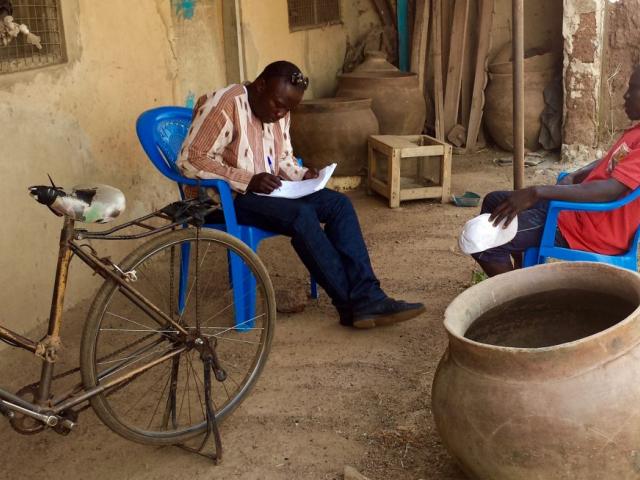