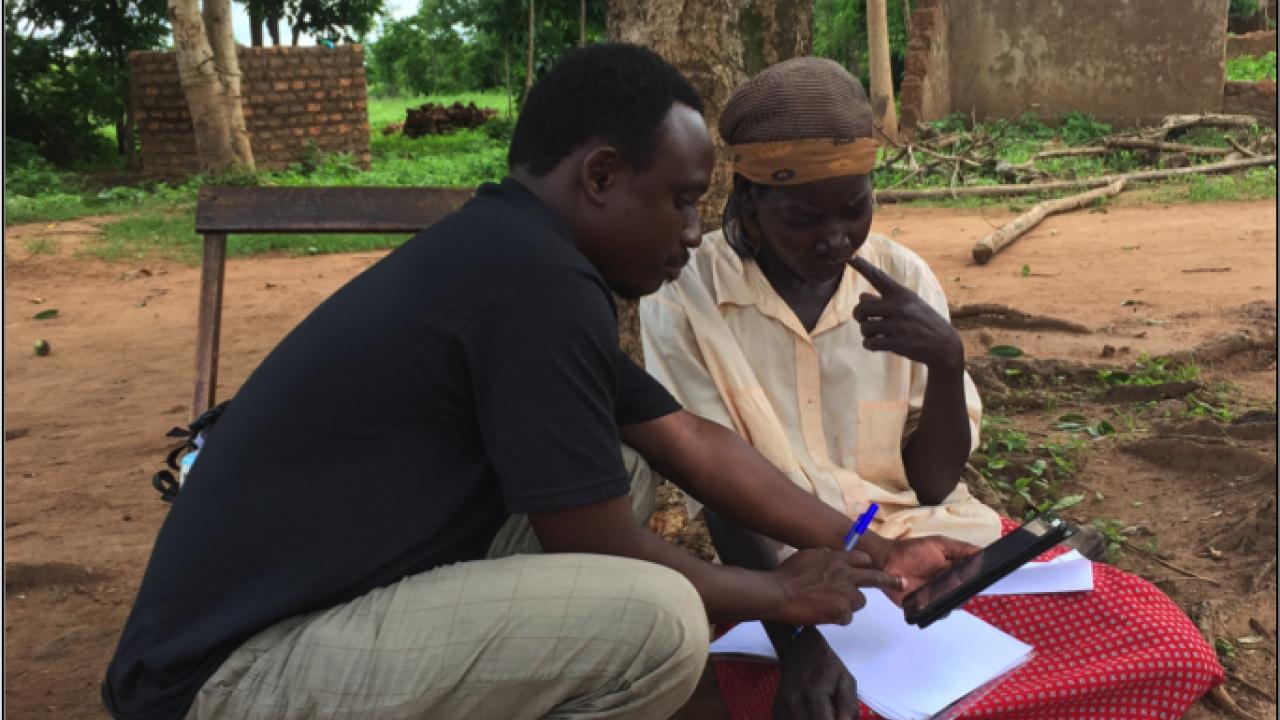 Uganda faces all too typical development challenges, including widespread poverty, low rates of labor absorption and stagnant agricultural growth. As a result, the country suffers from ongoing problems associated with land and forest degradation as poverty perpetuates activities with low returns and often forces families to deplete natural capital.

Charcoal production is broadly representative of the pressures facing mixed-use forests in developing regions. In many countries the charcoal trade represents one of the largest domestic industries, with some estimates showing that it eventually could rival cash crops in terms of overall employment. Yet, alarming projections of damages associated with charcoal production underscore the environmental havoc it can cause. 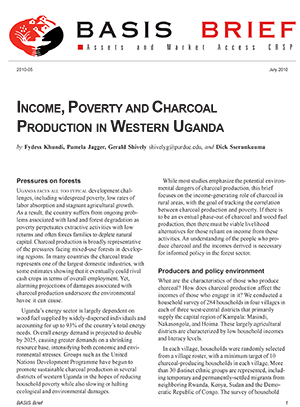 Uganda’s energy sector is largely dependent on wood fuel supplied by widely-dispersed individuals and accounting for up to 93% of the country’s total energy needs. Overall energy demand is projected to double by 2025, causing greater demands on a shrinking resource base, intensifying both economic and environmental stresses. Groups such as the United Nations Development Program have begun to promote sustainable charcoal production in several districts of western Uganda in the hopes of reducing household poverty while also slowing or halting ecological and environmental damages.

While most studies emphasize the potential environmental dangers of charcoal production, this brief focuses on the income-generating role of charcoal in rural areas, with the goal of tracking the correlation between charcoal production and poverty. If there is to be an eventual phase-out of charcoal and wood fuel production, then there must be viable livelihood alternatives for those reliant on income from these activities. An understanding of the people who produce charcoal and the incomes derived is necessary for informed policy in the forest sector.

What are the characteristics of those who produce charcoal? How does charcoal production affect the incomes of those who engage in it? We conducted a household survey of 284 households in four villages in each of three west-central districts that primarily supply the capital region of Kampala: Masindi, Nakasongola, and Hoima. These largely agricultural districts are characterized by low household incomes and literacy levels.

In each village, households were randomly selected from a village roster, with a minimum target of 10 charcoal-producing households in each village. More than 30 distinct ethnic groups are represented, including temporary and permanently-settled migrants from neighboring Rwanda, Kenya, Sudan and the Democratic Republic of Congo. The survey of household demographics, assets, activities and income sources covered activities during the 2007-08 agricultural season. We believe the data provide an accurate picture of household activity in the three districts, creating one of the best snapshots of charcoal production currently available for East Africa.

Important differences in physical and institutional infrastructure across study sites provide an opportunity to examine how the policy environment shapes charcoal activities in these locations. For example, Nakasongola and Hoima have much better roads and/ or connectedness to markets than does Masindi, which could drive both market participation and forest use. In terms of institutional arrangements focused on charcoal, Masindi and Nakasongola recently implemented licensing systems to tax charcoal trade along the marketing chain, rather than at the point of production. This differs markedly from institutional arrangements in Hoima, where both charcoal production and trade are taxed, but at a higher level of local government, meaning there is less oversight of participants in the value chain.

Masindi seems to have the best governance structure for monitoring charcoal production and enforcing the rules surrounding the charcoal trade. Furthermore, while in all three districts the district forest office, in collaboration with the National Forest Authority, is responsible for issuing licenses for charcoal production, Masindi implements the policy via a contract with a private party responsible for providing tenders on charcoal.

Under this arrangement charcoal production is undertaken on private land, and private landowners have sole decision-making authority over whether to lease their land for charcoal production. This leads to a relatively transparent system in which charcoal investors employ casual laborers to work on their behalf after winning tenders. These employers are then responsible for paying land rents and other costs associated with charcoal production. Our sample also includes numerous small-scale charcoal producers who are either landless or own land ill-suited for farming.

We analyzed factors that help explain patterns of participation in charcoal production. Broadly construed, results suggest that participation in charcoal production can be partly explained by household demographic characteristics (less prevalent among female and older heads), differences in household assets and endowments (more likely in households with more adults and less likely with higher levels of education and more agricultural tools), and partly by ecological differences (more likely in villages adjacent to woodland and near forests).

We find no strong statistical evidence linking farm size or migrant status to charcoal activity. Observed participation rates are lowest in Hoima. However, we find that households in Hoima have lower observed rates of charcoal participation than one would predict based solely on their characteristics. Hoima is the only district represented in our sample that requires producers to be licensed. Although enforcement is reported to be spotty, these results suggest that institutional licensing arrangements in that district might reduce charcoal participation somewhat.

We systematically matched each household that participated in charcoal production at least once during the previous 12 months with a similar “nearest neighbor” that did not participate in production. We found a number of differences in household endowments and other economic variables between these two groups. For example, charcoal-producing households (“participants”) have significantly younger heads than their non-producing cohorts (36 years compared with 41 years) and are far more likely to be headed by males. Participants own a significantly less valuable set of productive assets than non-participants (105,575 Ush vs. 163,429 Ush), providing possible evidence that charcoal producers have been unable to accumulate assets or move up the asset ladder as quickly as their non-producing cohorts.

In order to measure the causal effect of charcoal participation on total household income, we developed a counterfactual understanding of what household income might have been had participating households not produced charcoal. For each income quartile, we express the relative mean income (RMI) as a proportion of the mean income for the total sample population, where all incomes are expressed net of any charcoal income received. These results reveal differences in RMI patterns between charcoal producers and non-producers, especially in the upper quartiles. In all likelihood, charcoal income is not simply additional to other income sources, but instead may be related to underlying features of these two groups.

How does participation in charcoal production influences overall income among the sample households? Our analysis shows that charcoal production, on average, increases annual household income by approximately $319 per adult equivalent. To gauge the impact of participation on poverty, we constructed a poverty line for the sample households. If income per adult equivalent fell below the Ugandan poverty line of 23,559 Ush per month ($1.25 per day), households were classified as “poor.” If incomes exceeded this amount, households were classified as “not poor.” We also had classifications for more severe poverty. The results show that, compared with non producers, charcoal producers had a lower incidence of poverty (47 percent vs. 64 percent), less extreme poverty (23 percent vs. 34 percent) and less severe poverty (14 percent vs. 22 percent). The overall distribution of income was similar for the two groups.

We observe a strong correlation between livestock production and involvement in charcoal. Patterns indicate that charcoal production is less likely in female-headed households, and in those with older and better educated heads. Households with a larger stock of agricultural tools appear to be less likely to engage in charcoal production, suggesting that charcoal activity may fill an income gap in households with below-average agricultural capacity.

One goal of this analysis has been to measure the potential impacts of policy differences at the district level on charcoal activity and incomes. In general, we find it difficult to uncover clear district-level signals in the data, but believe some lessons can be drawn. For example, in Hoima, forestry institutions are relatively weak but the cost of activity is perceived to be high due to the cost of charcoal permits. Accordingly, we find rates of participation to be somewhat lower than one would expect based on the underlying characteristics of the Hoima sample.

This suggests the strength of forest institutions may be less important to producers than the cost of doing business: the permitting system may discourage activity and shift it to locations where producers can operate at lower cost. In the two districts with relatively strong forest institutions, but relatively low financial barriers to activity, we find higher rates of participation.

Given that demand for charcoal is likely to remain strong in the absence of policies aimed at reducing consumption, an appropriate policy response may be to develop spatially-differentiated economic incentives to divert activity away from areas of greatest environmental sensitivity, and at the same time use revenue from charcoal licensing to support tree planting efforts and agricultural outreach. However, to the extent the opportunity cost of labor remains low in most rural districts, producer prices for charcoal are likely to remain low as well.

For this reason, policymakers should remain attentive to the risk of introducing policies that could jeopardize the incomes of rural households that rely on charcoal and wood fuel income. Ultimately, the solution to the charcoal dilemma in Uganda will have to focus on a constellation of measures: enforcement targeted in environmentally sensitive areas, fee collection along the value chain, investments in tree planting, and efforts to develop viable and affordable alternatives to wood-based fuels for consumers.

Nkonya, E., J. Pender and E. Kato. 2008. “Who Knows, Who Cares? The Determinants of Enactment, Awareness, and Compliance with Community Natural Resource Management Regulations in Uganda.” Environment and Development Economics 13: 79-101.

UNDP. 2008. “Promotion of Sustainable Charcoal Production in Luwero and Nakasongola Districts.” Retrieved 2 May 2009 from www.undp.or.ug/projects/10.

Publication made possible by support in part from the US Agency for International Development Cooperative Agreement No. EDH-A-00-06-00003-00 through the Assets and Market Access CRSP. All views, interpretations, recommendations, and conclusions expressed in this paper are those of the authors and not necessarily those of the supporting or cooperating organizations. 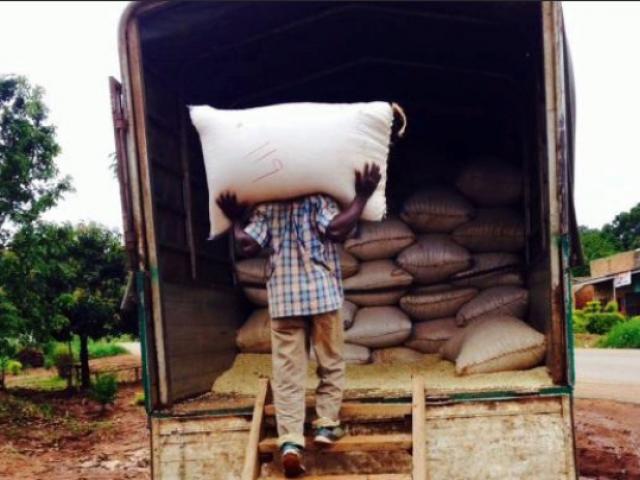