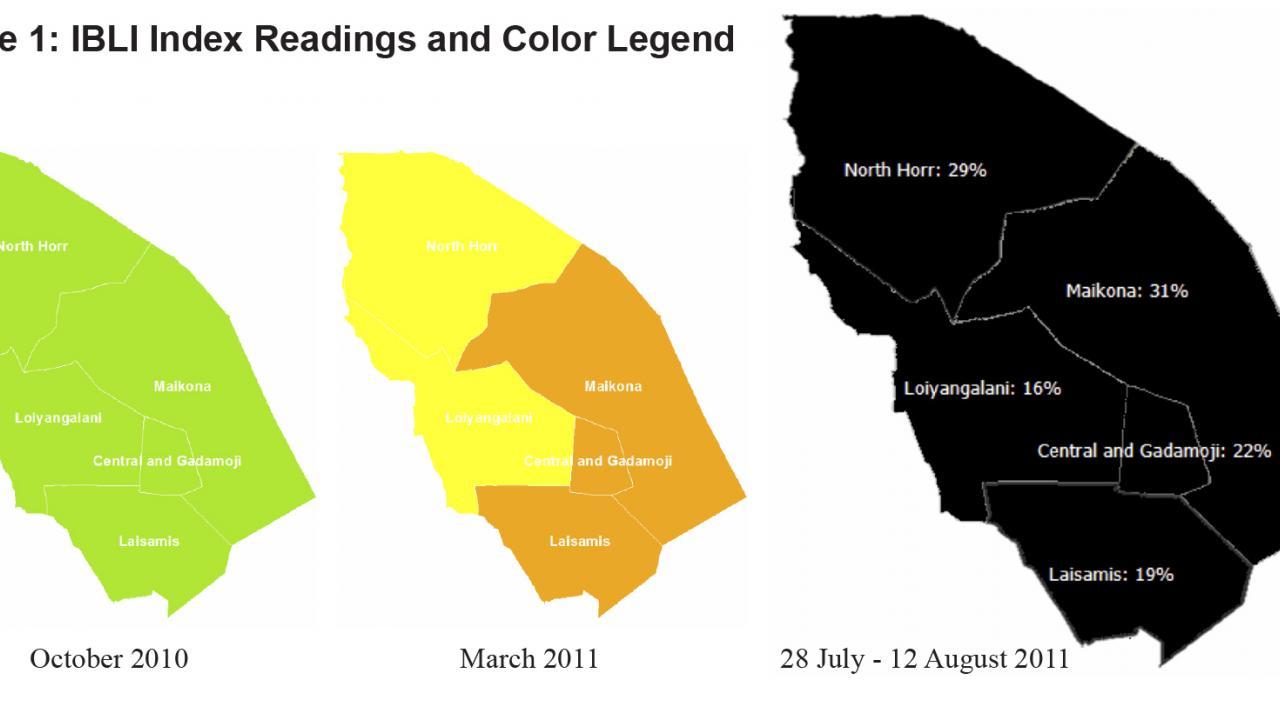 Pastoralists of the arid and semi-arid lands of Northern Kenya are highly vulnerable to the effects of drought and climate change. With livestock the main asset and income source for many in this region, any risk management strategy would need to provide households with a tool to protect themselves from livestock losses due to drought. In 2010 an innovative insurance product, the Index Based Livestock Insurance (IBLI), was introduced to do just that. 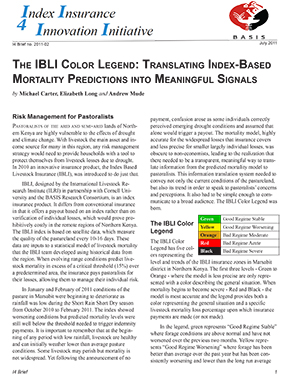 IBLI, designed by the International Livestock Research Institute (ILRI) in partnership with Cornell University and the BASIS Research Consortium, is an index insurance product. It differs from conventional insurance in that it offers a payout based on an index rather than on verification of individual losses, which would prove prohibitively costly in the remote regions of Northern Kenya. The IBLI index is based on satellite data, which measure the quality of the pastureland every 10-16 days. These data are inputs to a statistical model of livestock mortality that the IBLI team developed using historical data from the region. When evolving range conditions predict livestock mortality in excess of a critical threshold (15%) over a predetermined area, the insurance pays pastoralists for their losses, allowing them to manage their individual risk.

In January and February of 2011 conditions of the pasture in Marsabit were beginning to deteriorate as rainfall was low during the Short Rain Short Dry season from October 2010 to February 2011. The index showed worsening conditions but predicted mortality levels were still well below the threshold needed to trigger indemnity payments. It is important to remember that at the beginning of any period with low rainfall, livestock are healthy and can initially weather lower than average pasture conditions. Some livestock may perish but mortality is not widespread. Yet following the announcement of no payment, confusion arose as some individuals correctly perceived emerging drought conditions and assumed that alone would trigger a payout.

The mortality model, highly accurate for the widespread losses that insurance covers and less precise for smaller largely individual losses, was obscure to non-economists, leading to the realization that there needed to be a transparent, meaningful way to translate information from the predicted mortality model to pastoralists. This information translation system needed to convey not only the current conditions of the pastureland, but also its trend in order to speak to pastoralists’ concerns and perceptions. It also had to be simple enough to communicate to a broad audience. The IBLI Color Legend was born.

The IBLI Color Legend has five colors representing the level and trends of the IBLI insurance zones in Marsabit district in Northern Kenya. The first three levels - Green to Orange - where the model is less precise are only represented with a color describing the general situation. When mortality begins to become severe - Red and Black - the model is most accurate and the legend provides both a color representing the general situation and a specific livestock mortality loss percentage upon which insurance payments are made (or not made).

In the legend, green represents “Good Regime Stable” where forage conditions are above normal and have not worsened over the previous two months. Yellow represents “Good Regime Worsening” where forage has been better than average over the past year but has been consistently worsening and lower than the long run average over the previous two months. Orange, “Bad Regime Moderate”, signals the beginning of livestock mortality as cumulative forage levels for the past year have dropped below the long run average. Predicted losses, however, are less than 10% and not yet widespread. Red represents “Bad Regime Acute” where predicted livestock is between 10-15%. When predicted livestock mortality is greater than 15%, represented by black or “Bad Regime Severe” insurance payments will be triggered unless conditions radically improve. These color codes clearly and simply illustrate the relationship between predicted mortality and trends in pasture quality.

Index readings and color designation are posted every 15 days for each of the 5 insurance zones in Marsabit, allowing pastoralists to track the index, increasing transparency of IBLI and confidence in the insurance. Indemnity payments are made during the potential payment windows in March or October following the end of the bi-modal dry seasons.

Figure 1 illustrates the evolution of the IBLI index and color legend over the 2010/2011 period. In October 2010, range conditions as measured by satellite data were fine and there was no predicted mortality. By early 2011, the rains had begun to fail and pastoralists correctly perceived deteriorating conditions. While predicted mortality was still modest, the color legend shifted from green to yellow and orange, signaling to pastoralists that the satellite confirmed their perceptions deteriorating conditions, but that the conditions were not yet so severe as to trigger insurance payouts. At the date of the writing of this I4 Brief, conditions had continued to deteriorate and predicted mortality now exceeds the payout threshold in all five regions, ranging from 16% in Loiyangalani to 31% in Maikona.

Should the situation persist into October, those pastoralists who purchased IBLI for the current season will be protected from livestock losses greater than 15% as predicted by the index. For these families, low cost index-based risk management can arrest a potential fall into poverty and give them the chance to continue investing in their family’s livelihood.

For more information on IBLI including the most recent color legend visit http://www. ilri.org/ibli/.