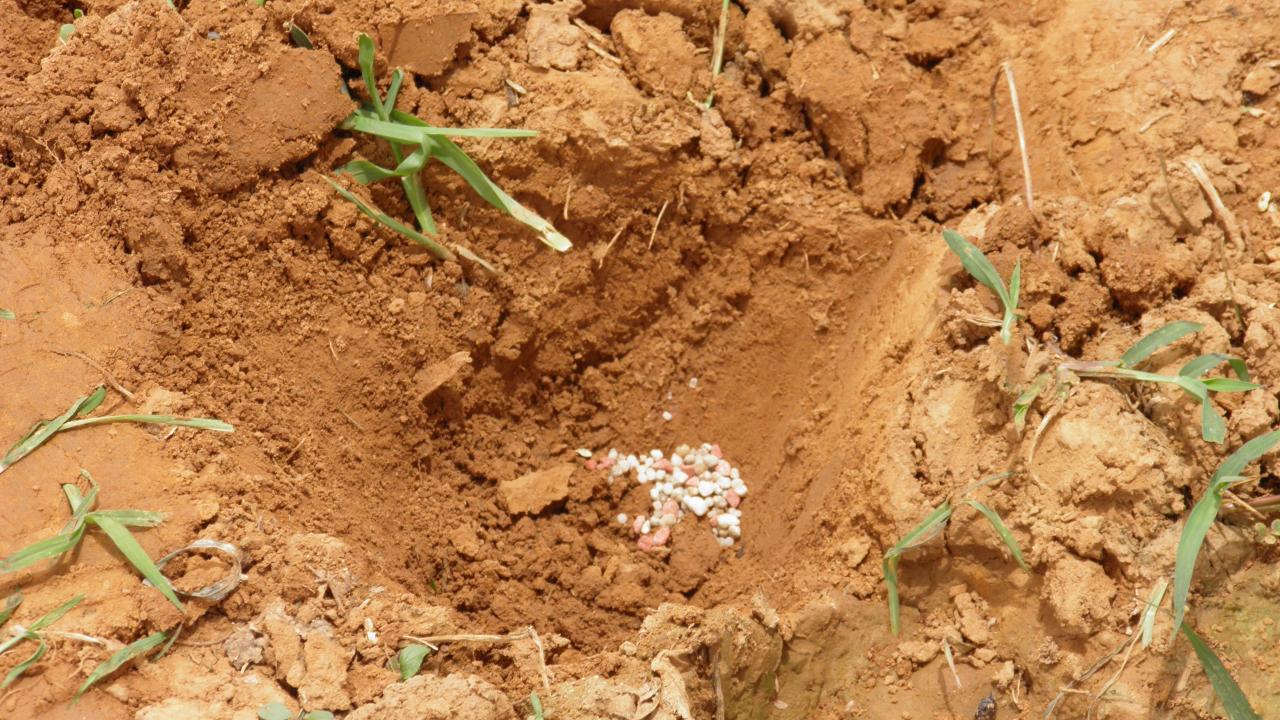 Households who choose to adopt new agricultural technologies have a limited amount of labor they can invest in making those technologies productive and profitable. As part of a broader randomized controlled trial (RCT) in Burkina Faso, we explored how the adoption of a labor intensive fertilizer application technique changed how households invested labor into their sorghum production.

We found that nuclear households invested the most labor into the new technique. Households made up of extended families invested less, which may be explained by how they organize their shared production. These findings could have implications for targeting agricultural innovations for increasing future food security. 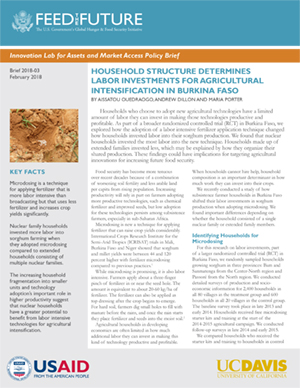 Food security has become more tenuous over recent decades because of a combination of worsening soil fertility and less arable land per capita from rising population. Increasing productivity will rely in part on farmers adopting more productive technologies, such as chemical fertilizer and improved seeds, but low adoption for these technologies persists among subsistence farmers, especially in sub-Saharan Africa.

Microdosing is new a technique for applying fertilizer that can raise crop yields considerably. International Crops Research Institute for the Semi-Arid Tropics (ICRISAT) trials in Mali, Burkina Faso and Niger showed that sorghum and millet yields were between 44 and 120 percent higher with fertilizer microdosing compared to previous practices.[1]

While microdosing is promising, it is also labor intensive. Farmers apply about a three-finger pinch of fertilizer in or near the seed hole. The amount is equivalent to about 20-60 kg/ha of fertilizer. The fertilizer can also be applied as top dressing after the crop begins to emerge. For hard soil, farmers dig small holes to fill with manure before the rains, and once the rain starts they place fertilizer and seeds into the moist soil.[2]

We recently conducted a study of how subsistence farmer households in Burkina Faso shifted their labor investments in sorghum production when adopting microdosing. We found important differences depending on whether the household consisted of a single nuclear family or extended family members.

For this research on labor investments, part of a larger randomized controlled trial (RCT) in Burkina Faso, we randomly sampled households growing sorghum in three provinces: Bam and Sanmatenga from the Center-North region and Passoré from the North region. We conducted detailed surveys of production and socio-economic information for 2,400 households in all 80 villages in the treatment group and 600 households in all 20 villages in the control group. The baseline survey took place in late 2013 and early 2014. Households received free microdosing starter kits and training at the start of the 2014-2015 agricultural campaign. We conducted follow-up surveys in late 2014 and early 2015.

We compared households who received the starter kits and training to households in control villages which did not. We identified two distinct types of households for this analysis. The first is a nuclear household consisting of one married male, his spouse(s) and immediate dependents. An extended household consists of extended family members–that is, multiple nuclear families.

Like many rural households in the West African Sahel, for households in this study sorghum is the main food staple and most widely cultivated dryland crop. Yet average yields are estimated at 0.8 ton/ha despite the potential to attain over 2 tons/ha.[3]

We find that self-declared adoption rates of microdosing are similar across treated nuclear family and treated extended family households (approximately 65 and 68 percent, respectively). Therefore, we can attribute differences in labor allocation to household structure. 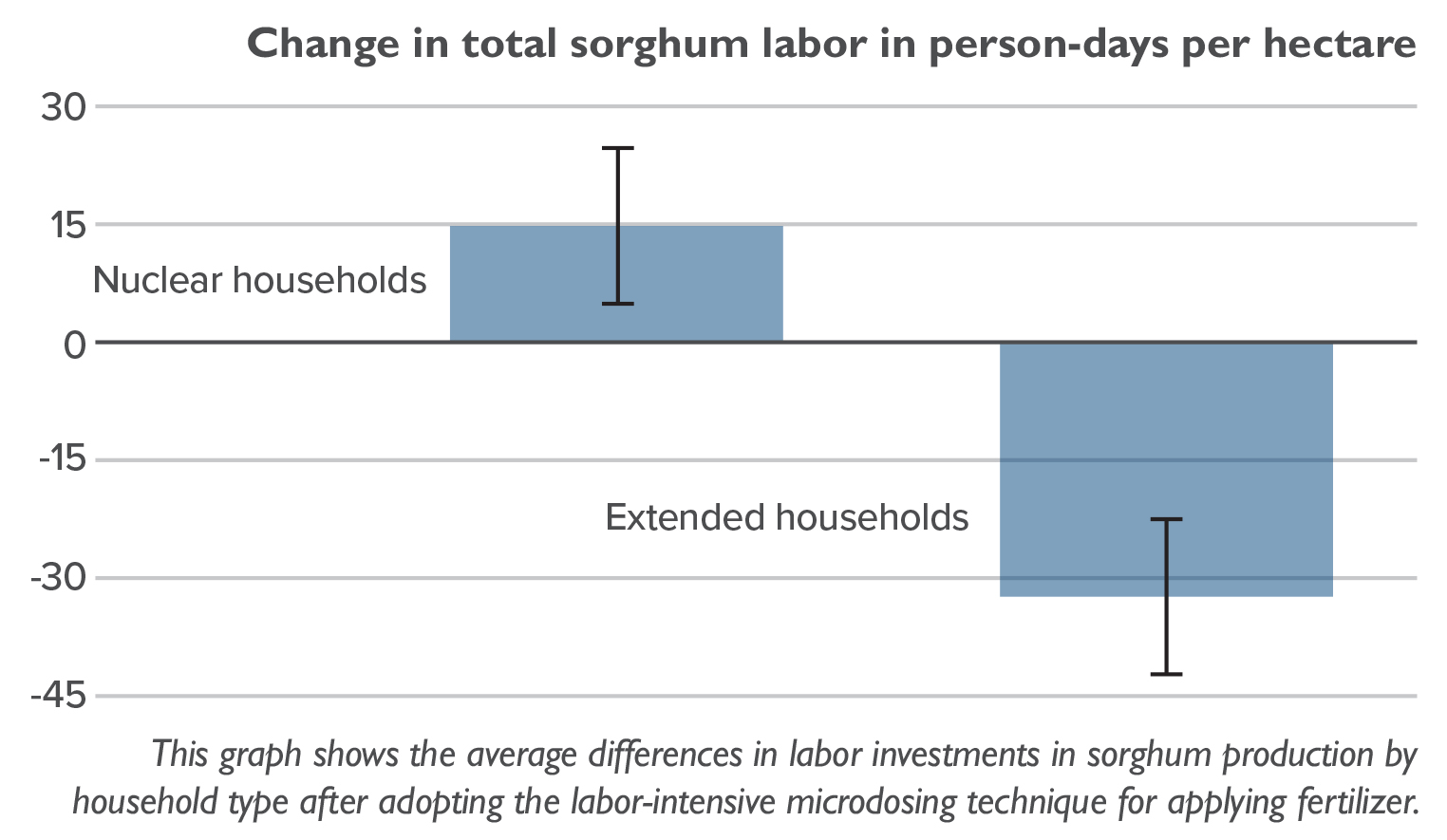 Overall, microdosing increased the labor invested in applying fertilizer to sorghum crops. For nuclear households, this increase was 42 percent, and for extended households it was 57 percent. This is consistent with the labor-intensive nature of the technique for fertilizing.
However, only nuclear family households increased their overall labor in growing sorghum, and by approximately 17 percent. The increased labor these families put into farming sorghum was an increase in farming labor overall, corresponding to an increase of nearly 15 person-days per hectare.

In extended households, microdosing decreased the total amount of labor invested into sorghum production by about 33 person-days per hectare. In these households, families split their labor between individual and collective plots. This provides less time and individual incentive to contribute the additional labor required for microdosing. Suggestive evidence of this is that additional labor dedicated to fertilizer application among these households is most strongly associated with a reduction in time spent applying manure.

This study shows that the microdosing program’s impacts on labor depended in large part on the structure of the household adopting the technology. This has important implications for policy interventions in developing countries, where the increasing fragmentation of households to smaller units[4] has led to an increase in the variety of household types. This is especially so in areas without strong labor markets or for households unable to hire help.

Whether these findings imply a recommendation of targeting labor-intensive agricultural innovations on nuclear households is not completely clear. A decisive answer will depend on the context and tradeoffs, as well as ethical issues surrounding the motives for such interventions.

Aissatou Ouedraogo is a postdoctoral fellow at the Friedman School of Nutrition Science and Policy, Tufts University.

Andrew Dillon is an assistant professor of agricultural, food and resource economics at Michigan State University.

Maria Porter is an assistant professor of agricultural, food and resource economics at Michigan State University. 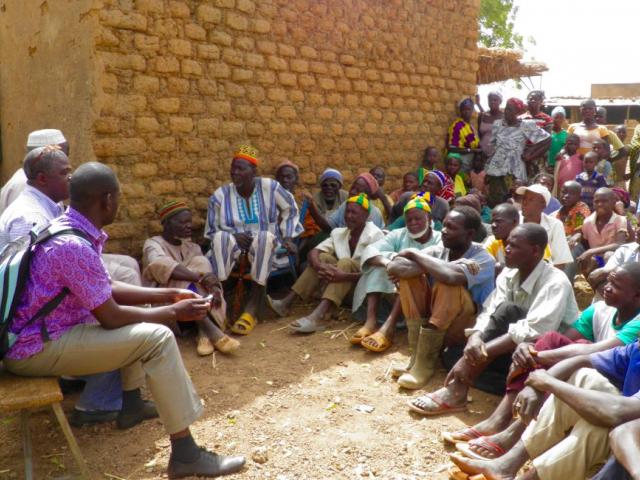