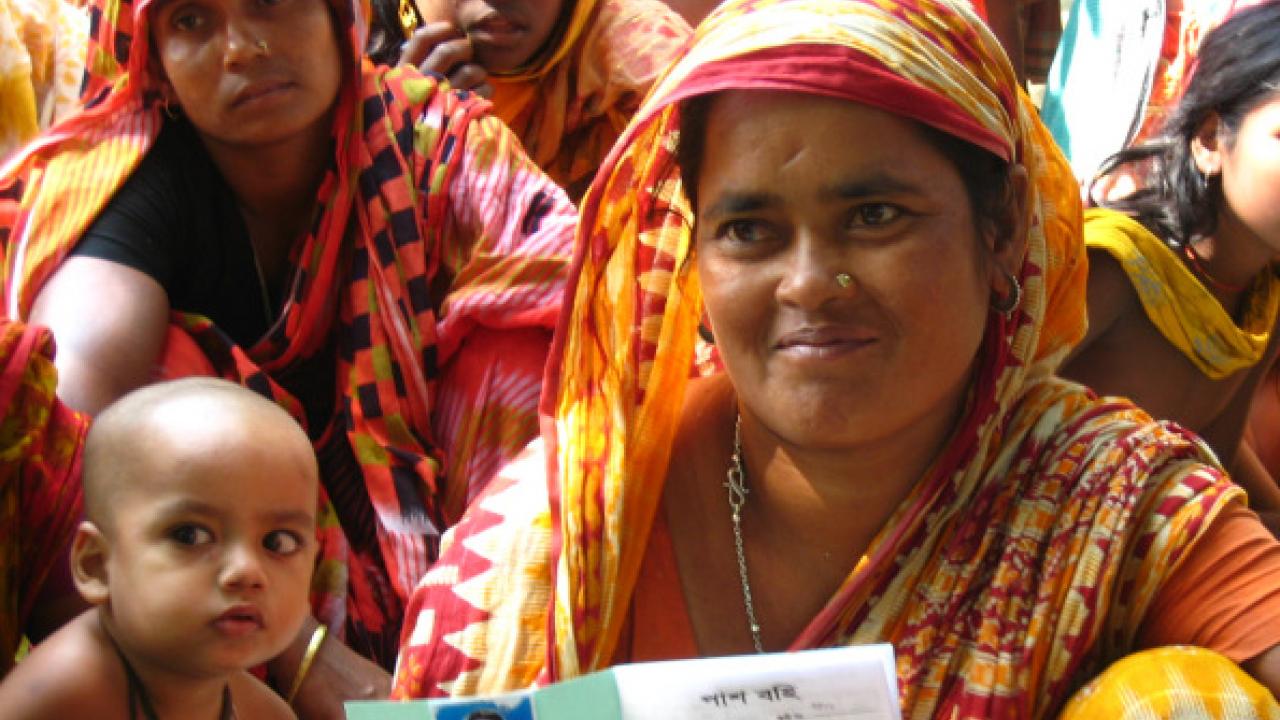 Households in developing countries use a variety of mechanisms such as drawing down assets, accessing capital markets, reallocating labor, and receiving private or public transfers to cope with shocks. Asset disposal is often used as a last resort, because irreversible asset losses may put the household at risk of future poverty. Thus, the responsiveness of asset holdings to shocks is of interest to policymakers due to its implications for the evolution of household poverty and well-being over time. 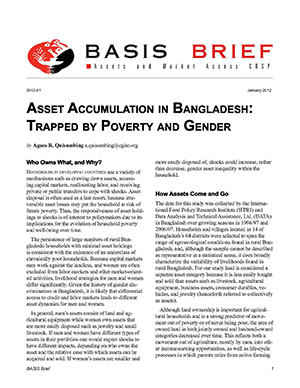 The persistence of large numbers of rural Bangladeshi households with minimal asset holdings is consistent with the existence of an underclass of chronically poor households. Because capital markets may work against the landless, and women are often excluded from labor markets and other market-oriented activities, livelihood strategies for men and women differ significantly. Given the history of gender discrimination in Bangladesh, it is likely that differential access to credit and labor markets leads to different asset dynamics for men and women.

In general, men's assets consist of land and agricultural equipment while women own assets that are more easily disposed such as jewelry and small livestock. If men and women have different types of assets in their portfolios one would expect shocks to have different impacts, depending on who owns the asset and the relative ease with which assets can be acquired and sold. If women's assets are smaller and more easily disposed of, shocks could increase, rather than decrease, gender asset inequality within the household.

How Assets Come and Go

The data for this study was collected by the International Food Policy Research Institute (IFPRI) and Data Analysis and Technical Assistance, Ltd. (DATA) in Bangladesh over growing seasons in 1996/97 and 2006/07. Households and villages located in 14 of Bangladesh's 64 districts were selected to span the range of agroecological conditions found in rural Bangladesh, and, although the sample cannot be described as representative in a statistical sense, it does broadly characterize the variability of livelihoods found in rural Bangladesh. For our study land is considered a separate asset category because it is less easily bought and sold than assets such as livestock, agricultural equipment, business assets, consumer durables, vehicles, and jewelry (henceforth referred to collectively as assets).

Although land ownership is important for agricultural households and is a strong predictor of movement out of poverty or of never being poor, the area of owned land in both jointly owned and husband-owned categories decreased over time. This reflects both a movement out of agriculture, mostly by men, into other income-earning opportunities, as well as life-cycle processes in which parents retire from active fanning and subdivide their land among their children (usually sons). Such decreases in the size of landholdings arc typically due to institutional factors such as partible inheritance (in which upon his death a father's laud is divided between the surviving sons) rather than market forces. However, the area of women-owned land increased by 39 percent, possibly as a result of NGO-led interventions that require land used for projects to be in women's names.

Wives' asset portfolios at baseline leaned toward livestock, jewelry and consumer durables. Growth rates of asset categories differed across ownership types. However, the fastest-growing assets in both jointly and husband-owned categories was jewelry. Although jewelry is traditionally considered a woman's asset, the value of jewelry exclusively owned by wives grew by less than 40 percent while the value of jewelry owned jointly or exclusively by husbands grew much more dramatically.

Most assets within the household are either held jointly or controlled by the husband. In both survey periods, more than 80 percent of owned land was controlled by the husband with 2 to 4 percent controlled by the wife. The ownership of assets is more equally distributed, even if the wife's share remains small. In 1996/97, 47 percent of assets were jointly owned, increasing to 52 percent in 2006/07. The husband's asset ownership remained steady between 37 and 39 percent in both periods, and the wife's share of the household's asset portfolio declined from 15.5 percent in 1996/97 to 9 percent in 2006/07. Thus, growth in women's asset holdings did not necessarily imply that the distribution of household assets had become more equal

This study suggests that the accumulation paths of individuals may be quite different from those of households. The analysis of the impact of shocks on jointly owned and individually owned assets also suggests that men's and women's assets respond differently to some types of shocks, with a husband's land being reduced by a death in the household and his assets drawn down to cope with dowry and wedding expenses. Both men's and women's assets are reduced by illness shocks. Life-cycle events also affect land and asset accumulation of men and women, with more recent events having different impacts than events in the more distant past.

Land accumulation varies depending on the type of shock and if the owner of the land is the husband or the wife. Flood shocks do not appear to affect land accumulation. Possibly owing to the effectiveness of emergency relief efforts, households seem to have recovered from both recent and more distant flood shocks. Households also seem to able to recover from shocks that occurred in the more distant past, but a more recent death made a major dent in husbands' land accumulation. Possibly because death is a signal for property division and inheritance, having experienced a recent death weakly increases the growth of a wife's land. Recent remittances appear to be weakly associated with increased land acquisition, but having received a dowry recently-signaling the marriage of a son-decreased a wife's landholdings.

The impact of shocks on asset accumulation differs depending on who owns the asset and on the timing of the shock. Flood shocks in 1997 and 200 I had a weak negative impact on jointly owned assets. Husbands' and wives' assets seem to have recovered well from illness shocks occurring in the earlier five-year period, with wives' assets showing some catch-up growth, but illness in the more recent five-year period had a negative impact on both husbands' and wives' assets.

A more recent death in the household also had a negative impact on jointly held assets. Inheritances received in the distant past built up husbands' and wives' assets, but not in the case of a recent inheritance, which is associated with a recent death and eventual division of property. Dowry or wedding expenses had a weak positive impact on husbands' assets (possibly indicating reporting bias), while recent dowry receipts increased growth in joint asset holdings.

The impact of shocks on the difference between the husband's and wife's asset growth within the same household is quite nuanced. Flood shocks do not appear to have any net impact on gender asset inequality. Idiosyncratic shocks and life-cycle events appear to have offsetting impacts on the gender asset gap within the household. While the death of a household member and dowry and wedding expenses end up reducing the growth of the husband's relative to the wife's assets-implying that husbands' assets bear the brunt of these shocks--earlier inheritance tends to benefit the husband's asset accumulation relative to that of the wife, while later inheritance increases the wife's asset accumulation relative to that of the husband. Because wives tend to be younger, on average, than husbands, earlier inheritance receipts may signal the husband receiving an inheritance, and later receipts, the wife. While illness takes a toll on both husbands' and wives' assets, it does not necessarily increase gender asset inequality.

Generally, families are thought to be part of one's support network, and are there to help you. However, in Bangladesh, the impact of your family depends both on your gender and on who else is in your family. Because husbands' brothers compete for parental land, a greater number of brothers decreases the husband's land accumulation and reduces the husband-wife land accumulation gap. Because husbands are expected to provide for their sisters, the latter may act as a drain on their brothers' resources yet not compete for parental land.

Indeed, the impact of husbands' sisters is ambiguous-having more sisters reduces jointly held land (which may typically have been acquired after marriage) but increases the land that the husband claims as his own, corning primarily through inheritance. When husbands have more sisters the gap in land accumulation increases between husbands and wives. The wife's number of sisters does not affect land (or asset accumulation) by either husband or wife. However, a greater distance from the wife's parental village reduces her husband's land accumulation.

Familial networks-mostly the wife's-also have an impact on the accumulation of assets. The gender asset-accumulation gap is smaller in households where wives have more brothers (who provide her with support) and fewer sisters. A husband's asset accumulation is lower the more brothers his wife has, and the gender asset gap is smaller. In contrast, possibly because other sisters compete with the wife for their brothers' support, or wives may also have to help their sisters, asset growth of husbands relative to wives is faster if wives have more sisters. Finally, households that live closer to the wife's parental village are also better able to acquire jointly held assets. In other words, factors that encourage the formation or maintenance of family networks for women reduce gender asset inequality.

Based on these findings, there are three potential areas for policy intervention to protect assets and reduce the gender asset gap. The first is providing some form of health insurance to protect against illness shocks. The recognition that illness shocks can be detrimental to poor people's well-being appears to receive less attention in Bangladesh than covariate shocks such as floods, precisely because illness is an idiosyncratic event, while widespread flooding easily attracts national and international attention.

However, this should not lead policymakers to underestimate the detrimental impact of illness on people's livelihoods and ability to move out of poverty. Second, providing households with the ability to save and invest, particularly when positive shocks such as inheritance and remittance receipts occur, might help build up their stock of assets and enable them to prepare for anticipated life-cycle events, such as endowing the next generation with assets.

Finally, while providing the poor with savings instruments could be one solution to mitigate the impact of dowry shocks, it does not address the other social implications of dowries. Although South Asian governments, including the government of Bangladesh, have attempted to curb dowries, the practice has continued and may even be on the rise. Some have argued that dowries will disappear as labor markets develop and children become less dependent on their families' assets for their livelihoods.

The pernicious effects of dowries on the poor, however, imply that one cannot wait for this evolutionary process to reach its conclusion. Rather the anti-dowry policy must be seen as an antipoverty initiative that also serves to reduce the oppression of women. As there is widespread reluctance to address this deeply rooted cultural practice in government and policy circles, innovative approaches to eliminate dowries arc needed that go beyond national economic policies and involve NGOs and civil society. 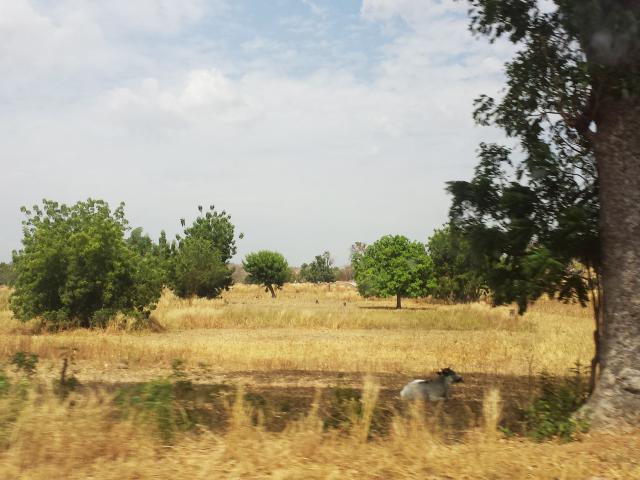