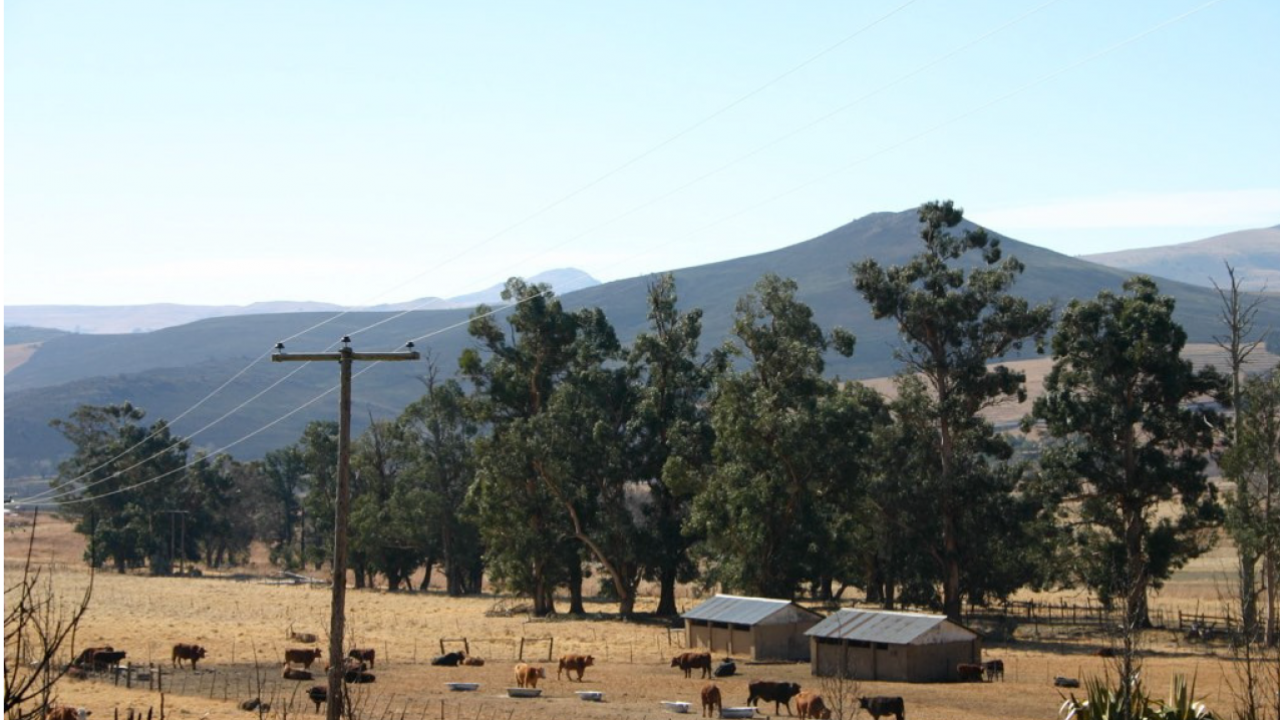 Can asset transfers have lasting impacts on the well-being of poor households? Asset inequality can leave large numbers of low wealth households so poor that they are unable to use pursue productive opportunities, caught in a “poverty trap,” or deep-rooted persistent structural poverty. For these households, it can be difficult, if not impossible, to accumulate assets, invest in improved technologies, or to grow out of poverty. 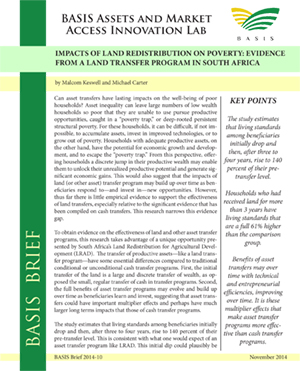 Households with adequate productive assets, on the other hand, have the potential for economic growth and development, and to escape the “poverty trap.” From this perspective, offering households a discrete jump in their productive wealth may enable them to unlock their unrealized productive potential and generate significant economic gains.

This would also suggest that the impacts of land (or other asset) transfer program may build up over time as beneficiaries respond to—and invest in—new opportunities. However, thus far there is little empirical evidence to support the effectiveness of land transfers, especially relative to the significant evidence that has been compiled on cash transfers. This research narrows this evidence gap.

To obtain evidence on the effectiveness of land and other asset transfer programs, this research takes advantage of a unique opportunity presented by South Africa’s Land Redistribution for Agricultural Development (LRAD).  The transfer of productive assets—like a land transfer program—have some essential differences compared to traditional conditional or unconditional cash transfer programs.

The study estimates that living standards among beneficiaries initially drop and then, after three to four years, rise to 140 percent of their pre-transfer level. This is consistent with what one would expect of an asset transfer program like LRAD. This initial dip could plausibly be explained if households, upon receiving the transfers, were simultaneously investing in the newly acquired land. In this case, the short run impact on households’ income and consumption could even be negative.

Yet there are two other reasons why the impact of an asset transfer may change over time. First, the beneficiary may experience a learning effect, with technical and entrepreneurial efficiencies improving over time. Second, the asset transfer may crowd-in investment in the new enterprises made possible by the LRAD grant.

Indeed, the initial lag makes sense for a program like LRAD, which is aimed not only at affecting rural livelihoods directly, but also at changing learning opportunities and investment incentives. In all of these instances, the overall impacts on beneficiary well-being are likely to be large in the long-run, as they may unlock productive opportunities and release poor households from poverty.

In the immediate aftermath of apartheid, the South African government brought forward a land reform agenda in 1994. This program was initially pursued as a restitution of legal rights, with lesser attention to securing the economic benefits typically associated with and reform efforts. The program was widely seen as ineffective, and met with sluggish uptake. In reaction, in 2001 South Africa overhauled its land reform approach, creating the LRAD, intended to provide land to black South Africans with an interest in farming, especially women.

LRAD makes land purchase grants to landless farm workers and labor tenants. Unlike traditional land reform programs, LRAD does not mandate redistribution of land to poor, but rather operates through markets on a willing buyer-willing seller basis. LRAD relied on beneficiary self-selection to ensure that resources would be channeled to those most interested in farming, and best able to benefit from the redistribution. The program requires applicants to live on or near the land they wish to acquire through the program.

The program works on the basis of a grant that is awarded to beneficiaries on a sliding scale. The minimum grant of 20,000 South African rand requires a matching (cash or in-kind) contribution of 5,000 rand. The maximum grant of 100,000 rand requires a matching contribution of 40,000 rand. These funds are then used to purchase land, which becomes the property of the beneficiaries.

There are four main stages to the LRAD application process, each of which generates variation in whether any potential individual beneficiary was treated with a land transfer, and if so, for how long prior to this study’s survey date. For the purposes of this study, those individuals who did not receive a grant, or that received one near the start date of the study, act as the control group.

The administrative processes are quite complex. Step 1 is project registration, which requires a state planner to do a site assessment. This provides the state information about the applicant’s eligibility, as well as their available resources and their potential constraints. Step 2 requires the planner to request the release of money to develop a proposal for a beneficiary. For Step 3, the planner works with the applicant to create a business plan and final proposal to submit to the state.

The final step in the administrative process is the review of the district screening committee, which includes stakeholders from various government bodies. The role of this committee is to screen applicants before they are passed to a provincial committee for approval. Once the applicants have been approved they have interviews in the field with program administrators and then the sales contract is signed.

Through the design of the LRAD implementation process, researchers were able to use the variation in whether (and for how long) an individual is treated (receives land) to identify impacts on beneficiary households. Because of the complex administrative process, the LRAD application process is subject to an array of forces and delays that not only determine whether or not an individual is treated, but the duration of treatment between the asset transfer and the research survey.

Such delays include delays in signing the sales contracts with the land seller, legal transfer of the land to the beneficiary, or other administrative complexities. Otherwise similar households that could have been treated sooner are denied immediate benefits for arbitrary reasons that are uncorrelated with their characteristics and expected gains from the program.

Assessment of the LRAD Beneficiaries

As this study was primarily concerned in measuring the impact of LRAD on living standards, the primary outcome of interest is monthly per-capita consumption expenditures. Within the sample, some treated households had received the land transfer five years before the survey date, while others had only recently received transfers.

These simple differences in averages may, however, misstate the true program impacts as the program was not rolled out a true randomized controlled trial. Using so-called continuous treatment econometrics to estimate LRAD impacts while controlling for any biases, we obtain essentially the same story as told by the descriptive statistics, with one important difference.  Figure 1 illustrates the estimated program impacts by duration of time since the land transfer. At the time transfer, the average beneficiary had a living standard approximately equal to a $2/ day poverty line.  Program impacts are thus displayed as percentage changes in living standards with respect to the poverty line.

As can be seen, immediately after the land transfer, living standard impacts are estimated to be sharply negative, likely reflecting the disruption of household livelihoods when they settle and adapt to their new farm base.  However, these negative impacts bottom out in the first year of land transfer and benefits increase steadily thereafter.  Over the long-term, these results indicate a living standard increase of some 40% relative to the poverty line.

The theoretical literature on asset inequality has long suggested that an asset transfer program – such as land redistribution – can be an effective anti-poverty tool. In principal, these programs have the potential to generate high rates of return by increasing the productive potential of the poor through improved market access and by providing them with assets to raise them above the threshold to escape poverty traps.

Long-run effects of the LRAD may suffice to lift households over the critical minimum threshold to escape the poverty trap. Benefits of asset transfers may, over time with technical and entrepreneurial efficiencies, improve. It is these multiplier effects that make asset transfer programs more effective than cash transfer programs.

There remain some significant areas for future research in asset transfer programs. Researchers observed, for example, that the intended targeting of women by LRAD does not seem to have been borne out by the data. Approved female-headed households have a lower probability than male-headed households of finally gaining access to LRAD grants, which raises issues of targeting. Also, as opposed to traditional impact studies, which focus on intermediate outcome measures such as crop yields or investment, this study exclusively looks the effects on standard of living.

Because LRAD beneficiaries are spread across the country and pursue a wide range of activities, there is no common economic activity or crop that can be used as an outcome variable to shed further light on the learning, productivity, and investment patterns that underlie these improvements in standards of living. Future work to unpack the impacts of asset transfers is warranted.

So does land redistribution make for good public policy if the goal is to reduce rural poverty? Compared to cash transfers, where it is possible to simply give the poor target population money, asset transfers are clearly more complicated and have more limited scope since not everyone can be a successful small-scale farmer.

It also remains to be determined if the increases in family well-being observed in this study spill over into the kinds of investment in child human capital detected in cash transfer programs. Regardless, the positive impacts detected here would suggest that more experimentation with asset transfer programs is warranted.

Publication made possible by support in part from the US Agency for International Development Cooperative Agreement No. AEG-A-00-08-00008-00 through the Assets and Market Access Collaborative Research Support Program. All views, interpretations, recommendations, and conclusions expressed in this paper are those of the authors and not necessarily those of the supporting or cooperating organizations.