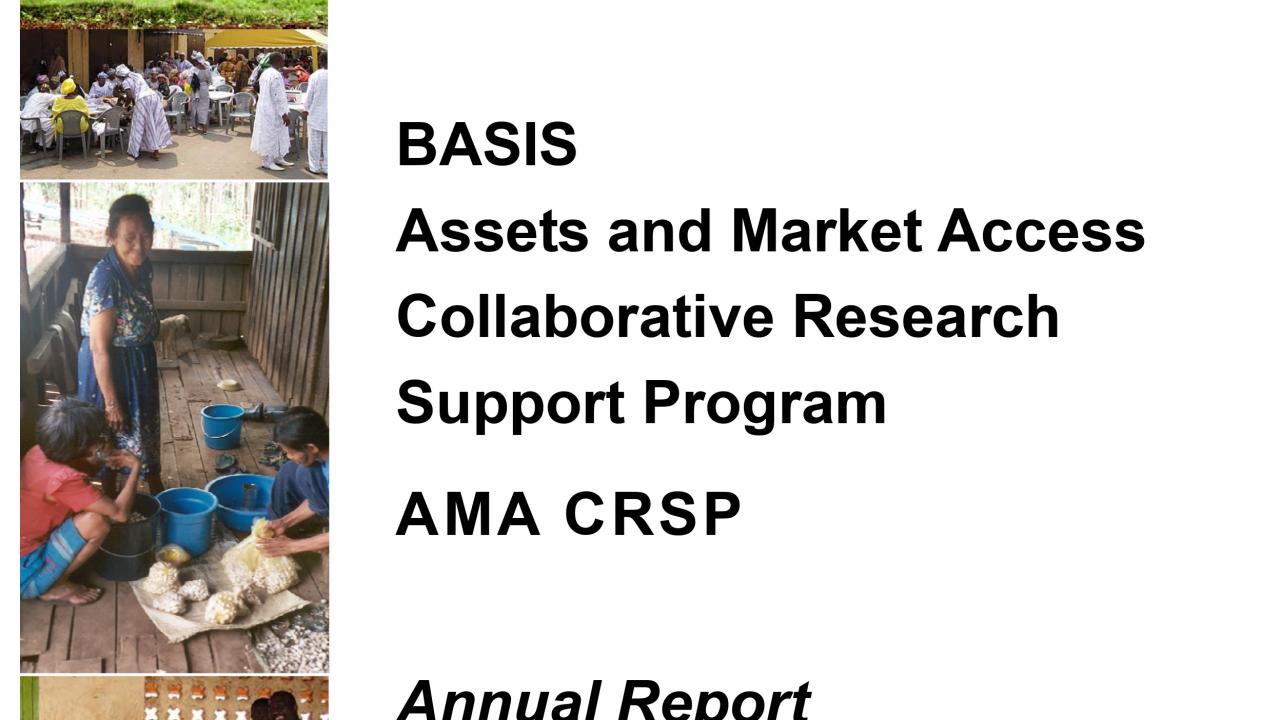 The intellectual contributions at the root the CRSP are a necessary but not sufficient condition for full success. Outreach events like the conference “Escaping Poverty Traps: Connecting the Chronically Poor to Economic Growth” (EPT) are a vital component in the process of turning findings into effective policy.

The EPT conference, held in Washington, DC, February 26-27, 2009, grew out of the challenge to USAID and other development assistance agencies to find mechanisms to connect the poor, especially the chronically poor, to economic growth. The chronically poor and food insecure are often bypassed by development efforts, except in times of crisis when humanitarian assistance measures such as food aid are used. The EPT conference presented a unique opportunity for donors, development professionals, policymakers and researchers to come together to find programs, and ways of implementing programs, that include this population in growth opportunities, especially agricultural growth.

Of the nearly 250 people attending, participants included the Acting Administrator of USAID, Alonzo Fulgham, and US Senator Richard Lugar, who has emerged as a leading legislative advocate for reinvestment in foreign agricultural assistance. Joining the BASIS AMA CRSP as sponsoring organizations for the conference were USAID’s Office of Agriculture, the Chronic Poverty Research Centre at the University of Manchester, and the International Fund for Agricultural Development. The NGO coalition InterAction and its many members were also extensively involved in the design of this event.

How can we do food aid better?

This question was the EPT conference starting point. Food security is linked to both poverty reduction outcomes at the micro-level, and critical to generating economic growth through increased productivity in agriculture. However, the urgent need for innovative food aid programming became apparent after the recent global food crisis, which spurred conference organizers to seek programs that not only developed more effective food aid programs, but also that can build on the productive capacities of the rural poor.

Especially for the rural poor, it is important not to overlook the heterogeneity of rural households. Households that fall below the critical asset threshold vary in their capacity to respond to risk and in their ability to secure a stable source of food. Conversely, households near the asset threshold, or right above it, face different constraints and opportunities. For interventions to be effective, therefore, recipient households have to be differentiated by the nature of constraints they face, thus providing insight into what programming options are best suited to relax the constraints.

The EPT conference also examined how interventions can be targeted so as to avoid trade-offs that forgo the productive capabilities of the adult poor in place of investing in the future prospects of children of the poor. Interrupting intergenerational poverty is paramount for poverty reduction and agricultural growth to be sustainable and have a meaningful impact on economic development.

The conference laid out some of what we know about the chronically poor, and identified several potential areas for intervention. Researchers identified the importance of smart subsidies, and discussed the idea of subsidies to promote the production of food for consumption for ultra-poor households. There was also research presented on how to increase the efficacy of food aid, including the use of local and regional procurement of food. The theme of a critical asset threshold above which households must be to stay out of poverty emerged throughout the conference, which makes the case for both asset protection, through tools like insurance, and asset transfers, such as cash transfers or land titling programs.

Researchers will continue to work on how to make these types of interventions work for the chronically poor. The  BASIS AMA CRSP research portfolio addresses many of these topics both directly and indirectly, with the goal of improving the lives of the world’s rural agricultural households.

While we cannot claim that the EPT conference resolved this most difficult development challenge, it did highlight exciting new findings on successful interventions, which in turn provide guidance on how to tackle the problem. The conference also presented well-grounded and innovative programming ideas that merit testing and evaluation. A sample of the work presented at the conference follows.

Can humanitarian assistance be made a smart development tool?

The answer, it turns out, may be no, at least in some places. While there is substantial interest in turning emergency relief into a development program through local and regional procurement of foodstuffs, BASIS researcher Chris Barrett (Cornell University) and his colleagues are concerned that, implemented in the wrong time and place, local and regional procurement could actually hurt populations in both the sourcing and recipient communities.

While the promise of local and regional procurement is strong, a new BASIS research effort will develop a simple evaluative tool that can be used to characterize those communities where local and regional procurement might make sense and those where it does not. Only with such a tool in mind, will we be in a position to begin the programming innovation and analysis needed to find out if emergency assistance can become an important tool for development for poor rural households.

A respondent to a qualitative poverty study remarked that chronic poverty “lays eggs,” passing itself on to the next generation. Cash transfer schemes in middleincome countries have attracted substantial attention based on their ability to help children reach secondary school. Yet what about poorer countries and younger children?

In work funded by BASIS in collaboration with the World Bank, Karen Macours (Johns Hopkins University) and her colleagues found that a conditional cash transfer program substantially boosted cognitive development of pre-school age children in Nicaragua. This finding is especially important in the light of work that shows that children from poor households fall progressively
further behind their better off peers as their preschool years progress. Halting and reversing that slide is obviously vital if schooling is to work and the cycle of chronic poverty is to be broken.

Asset grants as a launching pad

While well-implemented cash transfer programs can build assets and future prospects for the next generation, what about the current generation of poor adults?  In a striking and careful study of a South African asset transfer program, Malcolm Keswell (Universities of Stellenbosch and Cape Town) and his colleagues report that market-assisted transfers lift poor families substantially above the poverty line.

Their analysis shows that income increases over a period of three or four years, presumably as beneficiaries learn more about utilizing their expanded asset base and the opportunities it affords. Indeed, the implied long-run rate of return to the asset bundle actually transferred can only make sense if these basic asset grants crowded-in additional matching investments by the beneficiary families. This kind of program signals exactly the kind of multiplier effects that are needed to tackle the problem of rural poverty.

In sections of sub-Saharan Africa and south Asia, poor households enjoy modest access to land. Productivity on that land is often limited. In Mozambique, subsistence farmers use no purchased inputs and on average produce well under 1000 kilograms per-hectare.

Inspired in part by a fertilizer voucher program in Malawi where maize yields have risen to more than five tons per-hectare, Mozambique and many neighboring countries are experimenting with similar efforts. Can these voucher subsidy programs be made smarter and their impacts more sustainable?

BASIS researcher Dean Yang (University of Michigan) and colleagues search for answers to this question with a pilot project that overlays fertilizer voucher coupons with improved access to savings services. Implemented in conjunction with the International Fertilizer Development Center and the Opportunity Bank of Mozambique, this multi-year effort will trace the separate and combined impacts of these interventions in an area in central Mozambique. The program will employ a variety of innovative mechanisms to promote savings (including the kind of matched savings grants that have seen such success in the United States) and will examine if temporary subsidies can indeed be made smarter and result in long-term improvements in living standards.

These illustrative areas of work hint at the exciting new findings and innovative ideas that BASIS shares with the development community through its outreach events. The examples only scratch the surface of the work currently underway in the BASIS portfolio of research and pilot projects. Our work is organized under four themes. Below you will see the projects and pilots within each theme, along with a sample of findings.