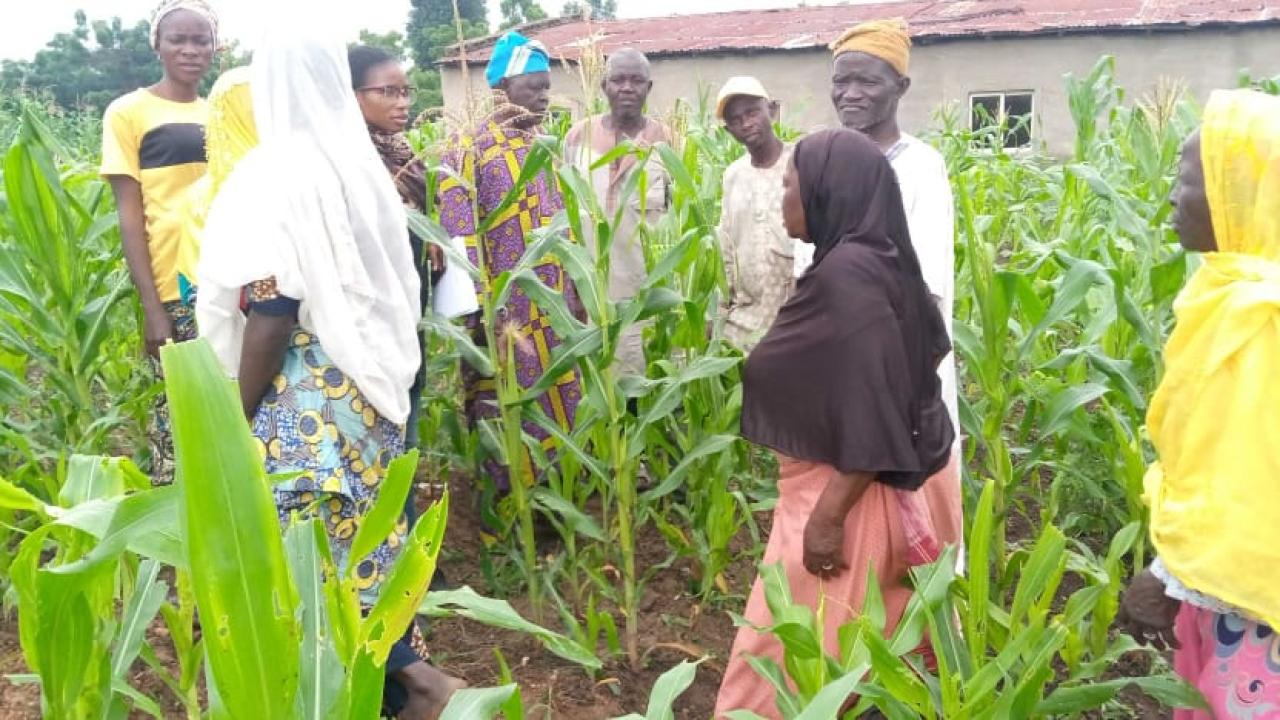 Resilience in rural communities is being increasingly tested worldwide by the ravages of climate change. The impacts on small- and medium-scale farmers in many countries is acute because they lack the resources to respond to major events such as drought, floods, hurricanes and cyclones.

Feed the Future ALL-IN principal investigator Opeyemi E. Ayinde is testing a bundle of credit, insurance and stress-tolerant maize seeds for small-scale farmers in Nigeria with a focus on increasing women's productivity and resilience. In this Q&A, Ayinde discusses her recent research, as well as policies that can increase rural resilience.

What are some of your research interests?

I have spent more than 20 years on research in agricultural risk management to bring food security and better livelihoods to small-scale producers. I have focused passionately on women empowerment in food production systems and environmental risk management. I have also contributed largely in the deployment of innovative maize seed resistant to climate risk and stress through the Drought Tolerant maize for Africa (DTMA) and Stress Tolerant Maize for Africa (STMA) initiatives.

My current research in Nigeria is funded through the Feed the Future Advancing Local Leadership, Innovation and Networks (ALL-IN) initiative, and it focuses on innovation systems and how it can help increase technology up-take and resilience of farmers, especially women farmers.

What are the most interesting research findings from your work so far?

One of my recent research findings is that agricultural productivity has persistently varied due to climate risk. This is due to variations in rainfall patterns and temperature. My fellow researchers and I recommended that if agricultural productivity was to be increased and sustained, then environment- and agriculture-sensitive technologies and innovations that can mitigate climate fluctuation should be encouraged.

We also discovered that while women farmers’ varietal preferences differed across locations, they all ranked the drought-tolerant maize varieties as the best at all locations with the most profitable returns, despite local differences. Key in this finding is the fact that the successes on-farm encouraged the farmers.

Recognizing that women-owned plots are on average lower in production, increasing the availability of stress-tolerant maize and knowledge of its benefits could increase productivity substantially. Increasing women’s involvement in varietal preferences and use will greatly advance the adoption of new technologies and thus ensure food security and enhanced agricultural productivity.

In addition, credit has played a critical role in the success of farming at all levels. Governments and other stakeholders should encourage credit institutions to grant farmers access to credit to enable them to invest in improved technologies that can raise their productivity. Access to efficient financial markets, in particular credit insurance, needs to be expanded significantly for small and medium sized farmers in sub-Saharan Africa.

I have highlighted a lack of research regarding the effect of agricultural insurance on small scale farmer’s credit utilization and efficiency in developing countries such as Nigeria, where agricultural production accounts for 40 percent of GDP. This is because formal lending institutions in many poorer regions of the world, are reluctant to offer loans to smaller farmers. Some governments have intervened with a range of agricultural risk management programs, including index insurance schemes.

To understand farmers’ attitudes toward these kinds of insurance we conducted a study related to programs offered by the Nigerian Agricultural Insurance Corporation (NAIC). We found that most farmers are not aware of insurance programs, and they fear that claims may not be paid. Many factors, including insurance agent attitudes and farming experience, affected their willingness to adopt index insurance. We also determined that the availability of coping strategies and farmer’s expectations of loss are key drivers of insurance coverage decisions.

Based on these and other findings, we recommended that credit and insurance agencies explore ways to expand their offerings and make all products more convenient and affordable to a wider range of farmers. We also recommended that extension agents and other agricultural development agencies be more actively involved in educating farmers and lenders about potential benefits of agricultural insurance.

What are some challenges you face in your industry?

The major challenges of my research work and the academic industry are that even at the peak of my career as a professor there is a lack of an enabling environment. This basically means that the strong belief of programs and interventions as “political cake” by farmers and the cultural and social obstacles that reduce the agricultural productivity of women.

What is the most promising or exciting part of your research work?

The most promising part of my research is having a positive impact on the livelihood and productivity of small-scale farmers, especially women, as well as impacting young researchers and academia in general. For every quotation, for every reference, for every mentee’s progress, for every positive report from farmers, I get excited.