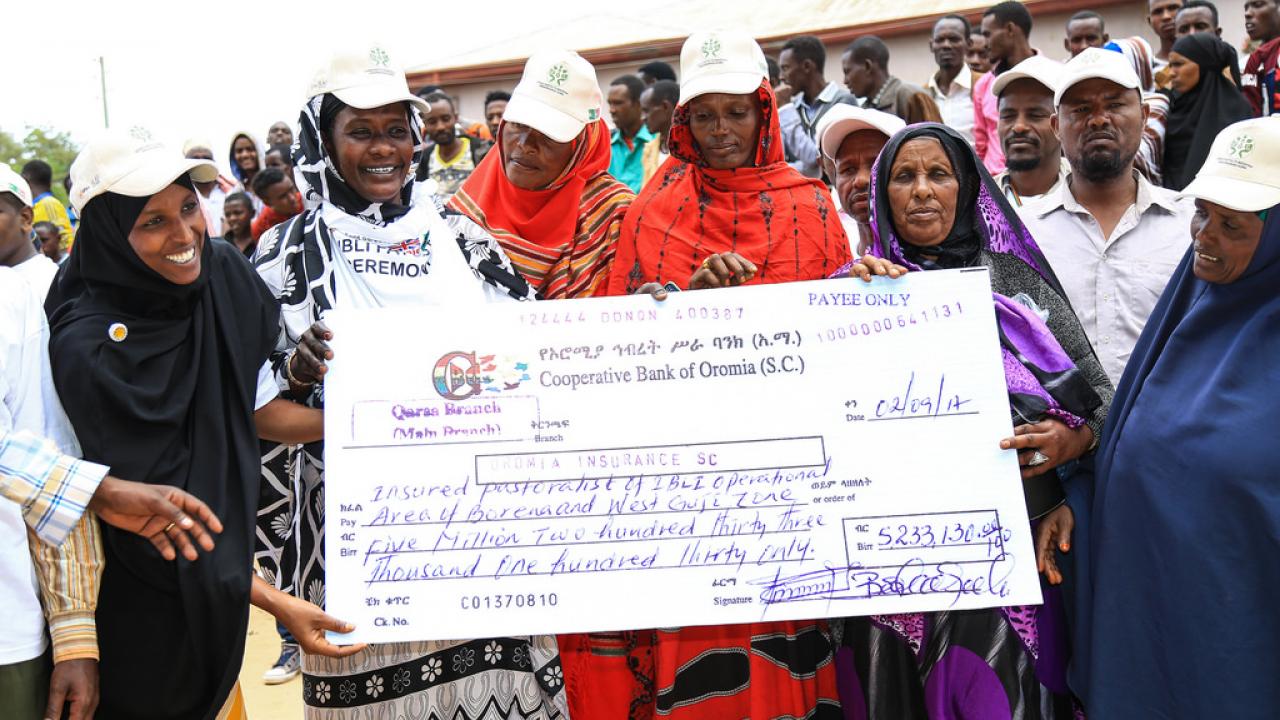 MOYALE, Ethiopia — More than 2,250 pastoralists received insurance payouts following the extremely poor rains this year in southern Ethiopia. Low levels of rainfall have led to the loss of approximately 300,000 livestock in 2017 in the Borana zone of the southern Oromia region.

The insurance payouts of more than ETB5.233 million (USD220,000) was the largest-ever micro-insurance indemnity made in Ethiopia. Each insured pastoralist received an average of ETB2,255 (USD96), which will allow the herders to purchase feeds for their surviving animals and to restock their herds.

Pastoralists in northern Kenya and southern Ethiopia have been insured by an index-based livestock insurance (IBLI) scheme devised in 2008 by the International Livestock Research Institute (ILRI) and its technical partners at Cornell University and the University of California at Davis. The Ethiopian component of this project was underwritten by the Oromia Insurance Company and introduced to eight districts of Borana in August 2012.

"Our evaluation conducted in Kenya and Ethiopia indicated that in times of drought households possessing livestock insurance are less likely than others to reduce their nutritional intake," said Siboniso Moyo, the ILRI director general’s representative in Ethiopia. "We also found that insured households make fewer distress sales of livestock assets and rely less on food aid than non-insured households. This payment is proof that the index-based livestock insurance system works here in Ethiopia."

Andrew Mude, ILRI’s IBLI project leader, stated that this year’s payout is the fifth, and largest, since the establishment of the project in Ethiopia in 2012. It took place on September 5, 2017 in Moyale town, the second largest in Borana. The number of insured farmers has steadily increased since the project’s inception. Since August 2012, more than 6,000 pastoralists from 10 districts throughout Borana have purchased the IBLI product.

IBLI-insured pastoralists receive a payout based on the numbers of livestock predicted to die when a season’s available forage falls below a certain level, as assessed by satellite imagery. Such insurance payouts protect pastoralists from having to make distress sales of livestock and to take other drastic measures to generate emergency cash for food and other essentials.

‘Insured households are seeing that for a relatively small investment, their livelihoods are much better protected’, said Masresha Taye, IBLI’s project coordinator in Ethiopia. ‘Insuring one small ruminant costs less than ETB56 a year, a head of cattle less than ETB333 and more expensive camels less than ETB560 per animal.

In contrast, severe droughts—which in recent decades have become more frequent and more intense in the Horn of Africa—have caused catastrophic herd losses. This insurance payment helps herders invest both in their animals and in their families’.

These initial results suggest that IBLI provides Ethiopia’s pastoral livestock herders with a valuable safety net in times of drought. IBLI has managed to help Ethiopia’s herders raise their livestock productivity and income both. Households having purchased IBLI, for example, made higher veterinary expenditures than non-insured households to maintain their livestock productivity, thereby increasing the total and per head incomes they received from milk sales.

The ILRI-led IBLI project works closely with the Oromia Insurance Company, which is underwriting the insurance policies, with Kifiya Financial Technology Plc, which is providing digital financial service support, and with research partners at Cornell University and UC Davis.